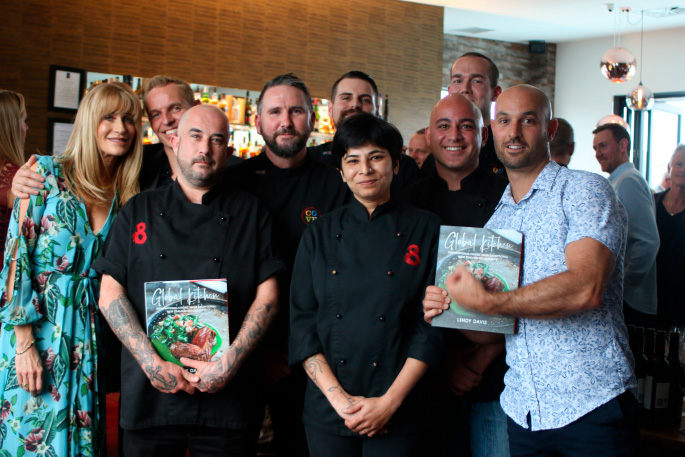 When Lindy Davis first met English-born restaurateur and chef Lloyd Rooney about five years ago, she was in his restaurant ‘The Cove’ in Waipu for lunch.

“We got chatting and he told me little bits about his life coming from London to New Zealand, and then setting up The Cove,” says Lindy, a journalist and writer who has also published a few books.

“I said to him I feel like your story could be a book, it’s so interesting.”

The next time she was there, they got  talking again.

“We had a glass of wine and then lunch and then he said ‘look I’ve been thinking about it and do you feel like you’d be interested in doing it?’

Lloyd had left behind his London life with its celebrities and glamour, and together with partner Mike Fraser had converted a nearly 100-year-old building into the successful Cove Restaurant  and Bar.

Lindy’s first book ‘The Quay to the Cove: Coastal Cuisine’, a book with recipes, also tells the fascinating life that took Lloyd from London to Europe to New Zealand.

Now, her second book ‘Global Kitchen’ has been published by New Holland Publishers. It is not only a celebration of Lloyd’s and Mike’s restaurant expansion into other locations, but it also showcases the top chefs from each restaurant, and the tasty cuisine that makes these such popular places to go and eat.

I went along to the launch of ‘Global Kitchen’ at Mount Maunganui’s Fire Restaurant which overlooks the new Mount urban space and fountains, known as Te Papa o Nga Manu Porotakataka. The location is superb. The food is outstanding. Lloyd and Mike celebrating is a joy to see.

The exuberance was spilling over, and Lloyd took over the microphone to belt out a song, while the chefs beamed and had a rare night off with invited guests who had come for the book launch.

After some celebratory speeches, large platters were served and in that moment I discovered one of the keys to their success. The flavours and taste are sensational. And of course presentation, fantastic hospitality, having fun, and that smile of Lloyd’s which sets any place alight. But you only need to sample one item from one platter to know the delight from having all your taste buds burst with flavour.

Lindy’s own fully tuned appreciation and interest in exceptional cuisine was ignited as a child.

“I used to watch my mum cooking in the kitchen,” says Lindy. “She would take a long time to prepare for dinner parties, and was very keen on food preparation and good food. She was quite experimental, and enjoyed doing, what was then in the 60s and 70s, quite exotic things. Like adding spices into a big roasted kumara mash, and basting eye fillet with onion and spices and slow cooking it. She was quite avant-garde for her day.”

Lloyd and Mike have not only grown from their single restaurant, The Cove in Waipu Cove, and their beef and sheep farm in the Waikato, but they’ve also created a number of other restaurants in Northland, including The Quay in Whangarei, The Dune in Mangawhai, Number 8 in Whangarei, and The Dune and Number 8 at Mount Maunganui.

It seems extraordinary to me that they would want to take the most popular dishes from each restaurant, and publish these into this wonderful new book Global Kitchen. But again, they love to celebrate and to share creative ideas, and this is not just any cookbook – it is a celebration of NZ’s fascinating multicultural cuisine.

The collection of dishes from each of the six restaurants gives the reader an opportunity to learn more about the artistic talent behind each recipe. There’s an insight into each head chef’s life as they share their personal journeys and culinary passions.

“I interviewed the chefs and wanted them to have their own voice as well,” says Lindy. “It provides a platform to learn more about their background and what motivated them to get into hospitality and in particularly, into the kitchen.”

The chefs hail from India, Brazil and NZ, with menus that merge South Pacific, European, Asian and South American cuisine.

The book has something for everyone. For example - the ‘Tree of Life’ pizza is a delicious alternative to dairy, with a gluten-free base, roasted squash, chickpeas, fresh oregano, broccoli florets, roasted tofu mayonnaise and vegan cheese.

I love using soy, ginger and garlic in my cooking, and there’s plenty to tantalise and delight, brought alive with exceptional photography by Grant Rooney. The recipes are easy to make and use locally sourced ingredients.

Released in October, ‘Global Kitchen’ acknowledges the diversity of New Zealand and features tasty delicious fare to suit every palate.