The untold story of a funeral director 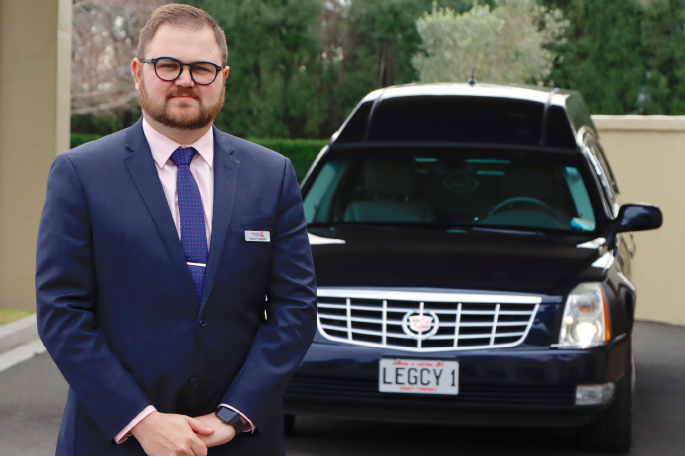 A lot of 22-year-olds spend their weekends with friends or at a bar or club but one Tauranga man spent his helping at a funeral home.

Many may think this is a bit macabre but for Marco Vianello it was a way to test the waters and see if funeral directing was the right path for him.

The 27-year-old has experienced a lot so far, he lost his father at seven and another four close family and friends before the age of 20.

“I’m young, but I’ve experienced a lot more than some people. I think that kind of experience, life experience can sort of just speak for itself,” says Marco.

He is the youngest funeral director in Tauranga by about 10 years and sometimes people are surprised by his age.

“People maybe a bit hesitant at the start. I’m not cocky, but confident in what I do.”

Marco has always done jobs that are traditionally out of his age bracket.

His first job out of high school was as a projectionist threading 35mm film onto a projector, then he was a heavy machine operator and truck driver.

“I got a lot of stick for being young and sort of told you’re too young for this, you don’t get it but that just adds to the challenge.”

Serving the community is also a large part of Marco’s life, he has been a volunteer for St John and Fire and Emergency.

“I’ve always been drawn to those jobs where you’re helping people. The best part about being on the ambulance is those conversations that you have with people.”

“It wasn’t because I was a bad paramedic that I had to become a funeral director,” he jokes.

“I sort of came into it because I thought people looked smart wearing a suit and I wanted to help people,” he says with a smile.

“There’s a lot of people that feel like this is a calling in their life, but to be quite honest with you, the people that think it’s a calling before they get into the job, don’t stay around for long.”

For someone who doesn’t like public speaking Marco is very engaging as he speaks about the ins and outs of his role. His passion for the job and the families he deals with is palpable.

“Our job is predominantly about helping the living as well as being a guardian for the deceased.”

Funeral directing means he is often on call and quite happily takes 3am calls about photos for a slide show or flowers for the service.

He likens planning a funeral to planning a wedding but you’re planning a celebration of someone’s life in just three or four days as opposed to the months and years that can go into wedding planning.

“For a funeral director, that can be incredibly tolling and then you’ve got, not that families would ever know, but you could have two or three families a week.

“You never ever let a family know that because as far as they’re concerned, they’re the only person that’s lost someone.”

Marco loves the stories he hears about people and the accomplishments throughout their lives.

“I always come back to it. I love the stories and they break your heart sometimes, but learning about people who live in sleepy little Tauranga who have just done incredible things in the world.”

He did a service for a 104-year man who did photography and the turnout was massive, with people sharing memories of the school photos he had taken of them. He also released a photography book of his aerial work.

Legacy general manager Kiri Randall agrees that the stories are what make the job worthwhile.

“People forget that we do what we do for the living and the stories that you hear about how people have lived is just amazing.”

Although Marco is not 100 per cent sure how he ended up is a funeral director he finds great fulfilment in his work.