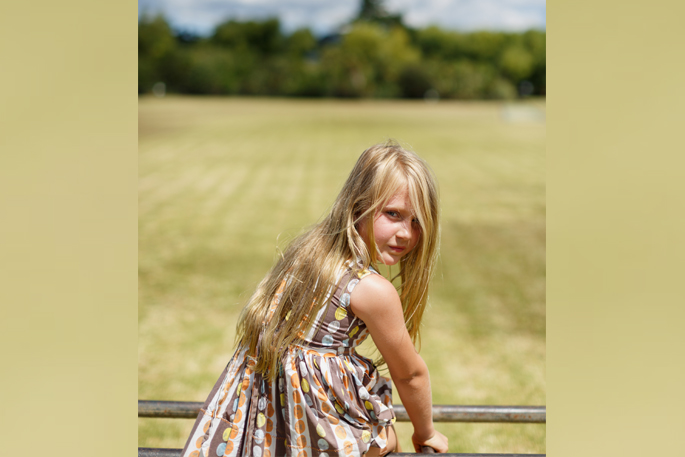 Papamoa Primary School pupil  Skyler Sylvester was only eight when she auditioned for and acted as the lead in ‘Oranges and Lemons’ a short film that has beaten out 77 other films to take top prize in the New Zealand International  Film Festival.

Skyler was at home in Papamoa when she heard the news. The short film is the first one she has successfully auditioned for.

“I was very excited and very happy,” says Skyler. “The acting part of it was pretty easy because we didn’t talk much. I had to be sad in one part and a little bit confused when I met the bird man.”

Director Robyn Grace says that the story was based on her own real life experience, about walking to school when she was five and being bullied by the neighbour’s daughter who wouldn’t let her walk with them.

“We walked over the paddocks and I’d get left behind every day.”

She says the three young girls in the film were amazing.

Skyler says she herself has never experienced being bullied at school, so had to act out how that would feel.

“I just thought it wouldn’t feel good if it was in real life being bullied like that,” says Skyler, who would like more opportunities to act. “The experience was very fun.”

The film was made on a farm over four days in February 2019, with Skyler’s mum Catherine Sylvester accompanying her.

“This is a very personal story and one which I have waited a long time to tell. It was crowd-funded and my entire family is up there in  the credits.”

She was initially speechless when the award was announced.

“We were sitting on the stage when they announced it, and apparently I looked vaguely like a goldfish when they said my name. It’s a very personal story for me, a story about my childhood.

Robyn says the appearance of the bird man confuses people watching the film.

“Men especially. They expect him to hurt our girl, use his power over her. It is hard-wired in our society that that is what happens when a vulnerable female encounters a male.

“No one expects him to be nice. It’s quite confronting when you realise that, because our world has changed so much and we are fearful.

“But this story is about power of a different kind. The bird man uses his power to show the girl how to find her own. By simply speaking to her and including her, she is empowered to take control.”

Robyn wrote the story five years ago, but didn’t get to make the film then.

“I came back to it after my mum died unexpectedly and tragically last year. It suddenly became important to tell the story that comes directly from my childhood and has a moment of my mum in all her silent strength in the kitchen, making up for the lack of attention from Dad and keeping us all fed and moving forward.

“The film is also about young girls learning to find their voice and find their freedom; and there’s small moments of my mum in the film. It’s about women being loud enough to be heard.”

The jury said ‘Oranges and Lemons’ “evoked beautifully the world and anxieties of childhood both in visual detail and performance, demonstrates a courage to resist sensationalism and predictability, while at the same time challenging, in a subtle and gentle way, our conditioned assumptions about human behaviour”.

In ‘Oranges and Lemons’ Robyn used caged animals in the film to evoke feelings.

“Our girl knows she is incapable of freeing all of them but she tries to pass on the power to her mother, so she too can free herself.”

Robyn says her story should evoke feelings of heat, the joy of a childhood summer, memories of a time gone by.

“The smell of Coppertone suntan lotion, or watermelon eaten off the rind. How the dust settles after a summer storm. The sound of a water sprinkler, or eating corn on the cob. Visceral reactions to the images.

“When I think of this story, the day I saw the bird catcher in the paddock, it makes me smile, makes me think of skipping to school, of running and jumping, of the sun on my back, of laughing out loud,” says Robyn.

“If that’s what happens to anyone who watches ‘Oranges and Lemons’, then I will have succeeded.”