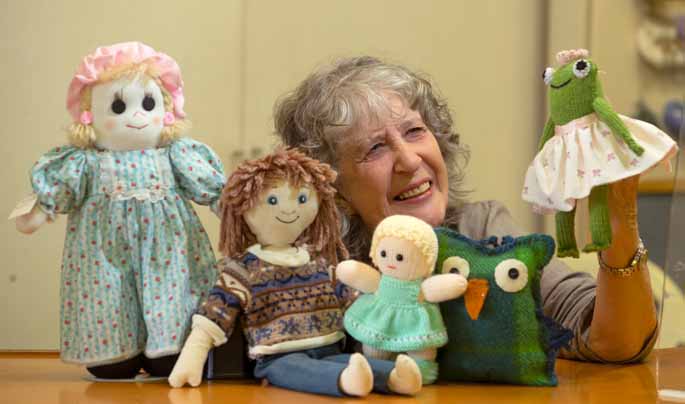 At 40 years old, Purple Patch has seen generations of people come through its doors, from children finding a toy to treasure, to a friend finding a gift for an expecting mum.

The store is one of the longest-standing retailers in Tauranga’s CBD, and the secret to its success is a collective of enthusiastic craftspeople.

The makers lovingly knit, crochet, sew, saw, sand and hammer one-of-a-kind pieces, including clothing, blankets, doll houses and wooden toys, into being. It was started by Joan Bryant in 1981.

A handful of them have been there since the beginning and some members are well into their 90s.

Board president Jillian Luckman Moss sums up the store’s philosophy and amazing collection of handcrafted pieces in a sentence.

But as she speaks about Purple Patch, its history, members and her involvement,
you get a sense of how many lives the store has touched.

The number is countless, with four decades’ worth of bespoke pieces having been made and bought by multiple generations of people.

Jillian talks about one of the original members whose daughter came in specifically to buy a piece made by her mum. She said to Jillian “I’m not sure how long mum will be able to do this - she’s over 90 now.”

She says for a lot of the members it keeps them busy and gives them purpose.

“It gives them a better quality of life when they’re creating something.”

Everyone that works in the store are volunteers and there are over 150 members of the collective that create the products.

“Some of us are just really passionate about selling stuff and getting enjoyment out of selling the artisans’ creations,” she says.

The makers set a price for their items, and Purple Patch takes a small commission from sales, which is used for expenses. Any profits from that commission are then donated to various charities.

Jillian is also immensely proud of the effort people put into their handiwork.

“We do beautiful crafts that are impeccable,” she adds. “We’ve got a little team of woodworkers, all these old guys, and their workmanship is just incredible.”

Purple Patch is keen to get a younger generation of craftspeople involved as well, says Jillian.

She first became a member 30 years ago. Jillian owned stores with her daughter, then in 2005 closed her store and became a self-confessed nomad travelling around the South Island. She joined once again on her return to Tauranga, three years ago.

“I love shopkeeping. I love people, but I’m so passionate about textiles. I knit, I crochet, I do furniture restoration, I do upholstery, I’ve done macramé,” she intones excitedly.

“I can’t say I’m an expert at anything, but if I make it, I have to love it. I always think ‘would I buy that?’

“That’s my concept; if you’re going to make something, you make it to the best of your
ability and sellable, so that it’s going to appeal to someone else.”

“There’s a lot of products in the shop now that are made from old doilies, old pieces of linen and old woollen blankets that have been felted and dyed,
to recycle what the world has already got,” explains Jillian.

One of the woodworkers uses recycled rimu for his creations.

There are also items that have been staples from the beginning, most of which are knitted baby clothes, she says.

“There’s a lot of regular lines that we’ve got, that people still like. I think that the older community think if you want baby singlets - hand-knitted woollen baby singlets - you go to Purple Patch because who else has them?”

Jane Shearman volunteers in the store and has been making clothes and toys for Purple Patch on-and-off for around 30 years. She is a true example of the intergenerational influence the store has had.

“My mother used to buy things for my kids here, 40 years ago,” she explains. “I sewed and everything and I thought ‘well, I could do some of that and get a little bit of money back while the kids are little’.

“There’s a lot of people come in and say their mothers used to shop here for them and they’ve got babies in prams.”

The toys Jane’s mother bought her daughters are still in good shape, which is like Purple Patch itself - timeless and threaded together by artisans that love their craft.