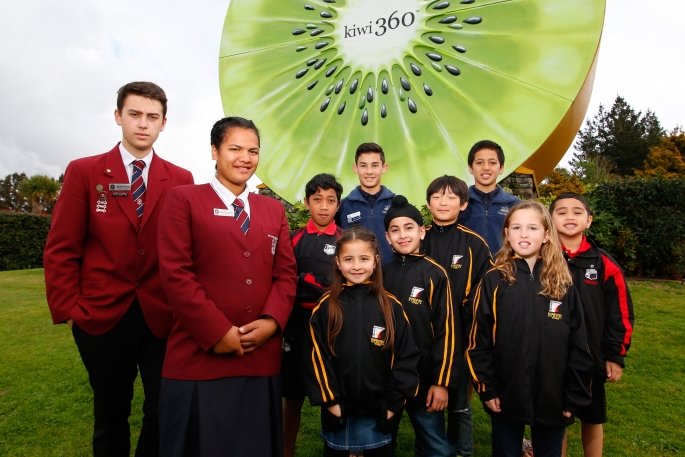 “It’s great!” says Mark Boyle, managing director of Te Puke Economic Development Group and the un-anointed high priest of Te Puke. “We have got our town back.”

He reckons the TEL has sucked up 80 per cent of the rumbling trucks out of Te Puke’s main street and when the town’s ambience could once be measured on the Richter scale, that’s a good thing.

So they’ve reclaimed their main street, annexed a chunk of State Highway 2 and renamed it Te Puke Highway. It was a clean and ruthless PR offensive. It’s now being immortalised in song as part of the Te Puke Goodness Grows Here Festival.

“After all, highways and roads are celebrated in song all over the world,” says Mark.

You start humming America’s ‘Ventura Highway’ in your mind, or ‘Rockin’ Down the Highway’ by The Doobie Brothers. And there’s perhaps the best known, ‘Route 66’, and one that could easily have been written for Te Puke – “If you ever plan to motor west, travel my way, take the highway that is best.”

“We think, as it’s done globally, a road to and from somewhere should recognise that somewhere,” says Mark. And in this case, the somewhere is Te Puke.

This is all leading up to the Te Puke Goodness Grows Here Festival on August 26-29.

“A winter celebration of everything that is good about this town,” explains Mark.

You can have a Convita or Kiwi 360 experience – honey, kiwifruit or both. There’s a major fundraiser – lunch with Michelle Boag, who will regale us with thoughts on Te Puke’s place in New Zealand and New Zealand’s place in the world.

Friday’s the big day, when Te Puke retailers will turn on something for everyone. Sights, sounds, tastes, music and, of course, the winner of the Te Puke Highway song contest will perform. School groups and individuals are doing stuff, and there’s a big charity auction.

Holding out for a hero

Mark is a career chief executive – from Rotorua, now lives in Pukehina, and has worked in the US, South America, South-east Asia, Australia and between. He’s now an entrenched advocate for Te Puke.

“Towns need advocates – especially if you are a small place with a small population and next door to a city with 120,000 people. You can get dwarfed.”

It’s not size envy, but he insists Te Puke won’t be become a suburb of Tauranga – not with Mark pitching for them.

“You will have a lot of people being Tauranga-centric. That’s fine.”

But let us remember, he says, Te Puke contributes 20 per cent of the BOP’s gross domestic product.

“We have affordable real estate, great schools with top learning outcomes, great roads, professional services, retail and all those things you need. If you stop telling that story you will be forgotten.”

Te Puke has achieved greatness on a global scale – Alex Harvey Industries has its genesis there; there was a gold rush and kiwifruit of varying hues; and Denny Hulme would probably still be living here if he hadn’t become world-champion motor racer.

Captain Cook sailed inside Motiti Island, and probably would have stopped and bought an orchard had it not been for an overpowering urge for cartography and discovery.

Now the town has new captains, of industry, commerce and sport, and a champion with a passion for rugby who wants to talk about it.

And Te Puke is “consistently top of the tree” in BOP club cricket. Some names? “Yep – Chris Cairns and Andy Roberts [were from here].” Kane Williamson played his club cricket for Te Puke, so they unashamedly claim him.

“It’s about identifying who we are, recognising what we do well and talking about our potential.”

And there’s a niceness, a familiarity and warmth about this town. There’s the Capitol Cinema, all art deco and murals – a cinema that looks like a cinema. There’s a Lion Red pub centre stage, right on the roundabout in the middle of town, and across the road proclaiming “Jesus is Lord.” You heard it first in Te Puke.

So it doesn’t have any issues? “Oh God yes!” At one time the town was infamous for something called Te Puke Thunder. “It was, apparently, very good marijuana,” says Mark. “There were problems with gangs in years gone also, but a lot less now.”

What about the name – ‘Te Puke Goodness Grows Here.’ It hardly flows off the tongue.

It’s a slogan, apparently, a strapline.

”There’s a lot of goodness happening in this district. Schools, people, industry, manufacturing, sawmills, dairying, high-quality milk products, kiwifruit. Goodness Grows Here kind of covers it. It has gathered traction and is working.”

The TPGGH, for brevity’s sake, is a conglomerate of business, community groups and individuals – people with “skin in the game”, who were keen to promote Te Puke and ensure the infrastructure and service were in place to encourage economic growth.

“So our needs and aspirations are articulated, and the decision makers, like the politicians, get to hear and understand the Te Puke version.”

Here’s a couple of TPGGH triumphs: They successfully lobbied for remission of the multi-pan tax. A business with 20 toilets and paying two or three thousand dollars a year stood to pay $20,000 tax in three years. “Crippling for a small business,” says Mark.

They’re also pushing tourism to the Chinese. “Many Chinese have never seen the ocean so if we can catch them a fish at Pukehina or Maketu it blows their minds. Then they can go to an orchard and see a kiwifruit growing, touch it and eat it.”

He says it’s certainly worth a lot of money and proves if Te Puke sells itself, tourists will drop in on their way to Rotorua.

They pushed hard for the Rangiuru Business Park and it is starting to happen, plus they made sure all the kids have software, hardware and broadband.

Mark throws himself back in his seat of the minimalist office – no tie, no clutter, no trappings.

“There you go. That’s who we are, that’s what we are doing, what we stand for.”

Then the proselytising Mark, the man who doesn’t get bogged down with rubbish, who gets on and does things, prepares to do just that. For Te Puke, of course.