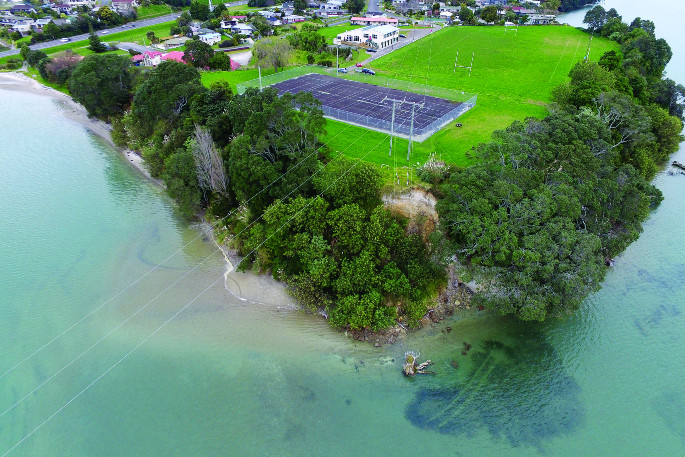 The power lines which pass over the marae in Maungatapu. Photo: Supplied/Bay Waka.

Transpower have applied for leave to appeal a High Court decision regarding power lines which traverse over the Maungatapu Marae.

In May, the High Court overruled a previous Environment Court decision to grant consents to Transpower to replace the 3.3km 110kV A-line, with a power pole set to be placed next to the marae.

The powerlines, operated by Transpower, were installed by the Ministry of Works in the late 1950s.

The lines, which stretch across Rangataua Bay between the marae and Matapihi, have long been a source of contention for the Ngāti Hē hapu and the community surrounding the Opopoti marae.

Transpower’s plans for replacing the lines did not align with members of that community but the Environment Court granted consents.

The High Court quashed that decision in late May, following an appeal by the Tauranga Environmental Society, with the backing of Ngāti Hē and marae trustees.

Justice Palmer’s ruling stated that Ngāti Hē are the experts of their own land, and if their collective “considered, consistent and genuine” view is that the proposal has a significantly adverse impact on an area with cultural significance to them, it is not the place of the Court to rule in opposition.

The High Court ruled that the solution to replacing the power lines is not in line with “Ngāti Hē’s rangatiratanga, guaranteed to them by art 2 of the Treaty of Waitangi.”

“This has made New Zealand case law, and right here in Maungatapu. But the fight is not over."

“The facts are that if you are kaumatua and explain that your cultural values are harmed by a proposal and why, by law, proper consultation with the rightful people, not self-appointed so-called representatives, is needed prior to applying for consent.”

It was a decision celebrated and discussed at a hui last month, under the shadow of the powerlines. But it now appears the contentious battle, which has waged for over 60 years, may continue.

“We appreciate the harbour, pā and marae are of cultural significance to manawhenua,” says a Transpower spokesperson.

“We are concerned that the High Court decision has not properly taken into account the significant positive benefits of the proposal, including maintaining security of supply to Mount Maunganui and for affected landowners.

“The decision has significant legal implications for Transpower and other infrastructure operators on how to correctly interpret and apply RMA planning instruments when consents are sought.

“Therefore, we have applied for leave to appeal the decision to the Court of Appeal.”

The Tauranga Environmental Protection Society will be opposing the leave to appeal.

Bay of Plenty Regional Council confirm they will consent to Transpower’s application for leave to appeal the High Court decision as they believe it “creates significant uncertainty for resource consent decision making”.

“We recognise the sensitivity of our decision, and tangata whenua’s potential disappointment with our approach,” says Bay of Plenty Regional Council consents manager, Reuben Fraser.

“We value our relationships with our iwi partners and do not challenge the significant relationship that Ngāti Hē have with Te Awanui and Rangataua Bay.”