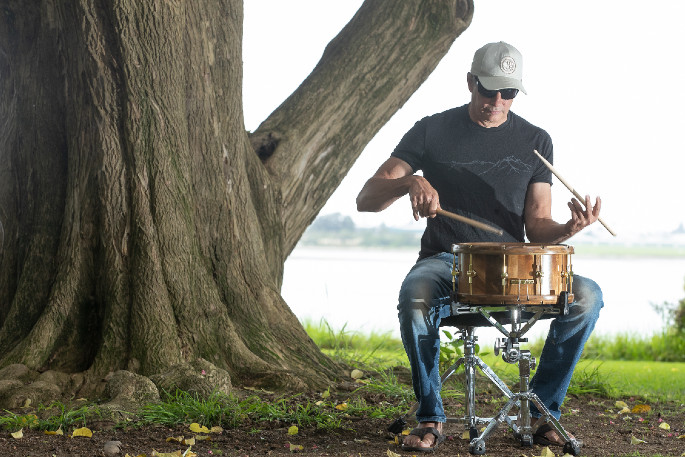 Jeff Nilson and his snare drum made from 20,000-year-old swamp kauri. Photo: John

A place to be alone, to hide out or hang out with male friends while debating politics over a beer, and a place to indulge in hobbies like playing drums.

During the Covid lockdown, Jeff Nilson’s man cave became the birthplace of a snare drum made from 20,000-year-old pieces of swamp kauri.

“There was a pile of timber around and I thought ‘I’m going to make a snare drum’, but I never actually did it until after lockdown,” says Jeff.

“I did start on it, but then thought ‘actually, you have all these other jobs to do, you better do them first before you start doing jobs like that’.”

Whilst waiting on necessary brass pieces to arrive from the United States, there was plenty of woodworking to get on with, especially the making of two rims. Time wasn’t measured in hours.

“It took lots of beers and a few smokes,” he admits. “I dunno, if you want to put a figure on it I’d say 80 hours or something like that. But I’m a perfectionist.”

Each rim, made of four layers, has 60 pieces of kauri. Unlike a steam-bent drum made from one piece of wood, a stave snare drum uses triangular pieces joined in a circle which is rounded off.

Jeff did woodwork at school but hadn’t pursued it. On returning from overseas in the 1990s, a friend asked him to help mill a rimu log.

“He gave me a big slab of it. I made a big set of rimu drawers for the missus and then got passionate for making woodwork and just got into it.”

He built his house, using swamp kauri to make telephones and “all sorts of stuff”.

“The first thing I made was a swamp kauri toilet seat. It’s beautiful and custom made, but my three little boys would flick the seat up and it would drop down and smash. I fixed it and they did it again and it broke. I gave up. Now the kids are 18-to-20, so they won’t do that anymore.”

His friend with the rimu had also found kauri log stumps in a creek in Pyes Pā.

“He talked to the farmer about it and got in there with big timberjacks, raised the logs out of the creek, waterblasted them to get all the dirt off them, then chainsawed and milled them into slabs. Then we winched them out of the ravine.

“The wood’s been sitting around. I’ve got three more big slabs of it at home.”

The snare drum came from offcuts left over from other things. There’s enough wood to make a whole drumset, although a bass drum requires larger pieces of wood.

Jeff says the choice of kauri over rimu had nothing to do with sound quality.

“I really love kauri,” he says. “It’s pretty. One of my mates, Dean Gold, passed away recently, and part of my grieving process was to retreat to my cave and I’m now building a full six-piece drum kit. In memorium of him, the kit will be called Goldie."