A new side to Simon Bridges 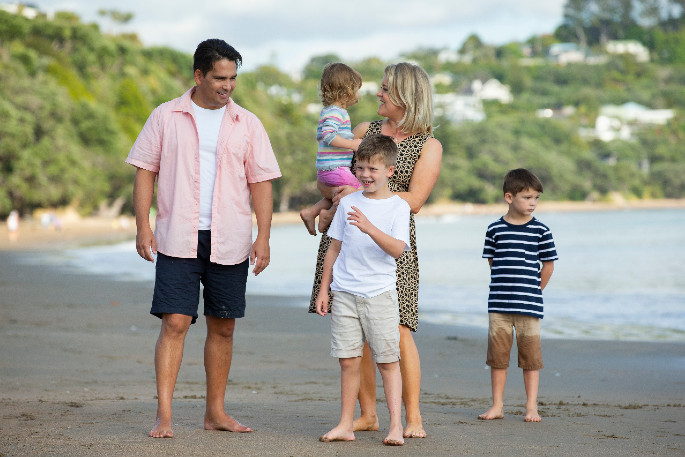 Simon with his wife Natalie and children, Harry, Emlyn and Jemima.

“There’s things in the book that definitely should be embarrassing, but I’m not actually embarrassed by them.”

Simon Bridges is talking about his new novel National Identity: Confessions of an Outsider.

The politician “had nothing to lose” and decided to share a very honest account of his life and offer his views on what it means to be a New Zealander.

“I’m middle-aged now, and I’m happy to have people think what they will think.”

One of those embarrassing moments Simon wrote about is his lack of courage when being beaten up as a young man in West Auckland.

The Tauranga MP has also been very frank about being “deeply hurt” when, as leader of the National Party, he was mocked for his Kiwi twang.

In 2019 The Green Party released an ad they said “poked fun” at his accent, in response to attack ads from National about government announcements on electric vehicles. This was one of many digs at Simon’s intonation.

“It’s so personal and it wasn’t something I felt I could or wanted to change, because it’s where I come from.”

Simon found writing cathartic, but there are areas that were difficult to face.

“Like being really upfront about how I feel about being Māori and confronting some of those things,” he says.

“Whether it’s my Māori heritage and feeling too Māori, or not Māori enough.

In the chapter Fatherhood, Simon examines his relationship with his dad Heath and reflects on his childhood.

“Emotionally, as I was growing up, my father was an island,” writes Simon.

“Like one of those islets I know so well out from the Mount beach. You could in theory swim across to it and visit, but for some reason you never do. Dad was just like that. Always present but distant.”

This chapter is especially poignant for Simon because Heath passed away, aged 87, around two months ago. Although his dad didn’t get to read the book, Simon says he was proud that it had been written.

“I wasn’t so worried about my dad and I wrote really honestly about him,” says Simon.

“He’s such a good stick, I don't think he would have been worried.”

Simon was apprehensive about how his mum, Ruth, his five siblings and extended family might react to his novel.

“It’s definitely my truth and what I believe to be accurate.

“But everyone in a family will have a slightly different viewpoint, because they’re looking at it from a different time and place and angle.”

Thankfully his mum thinks it’s great, aside from “a few little grammatical things and other technical mistakes”.

“She thinks there’s a real truth to it and she really enjoyed reading it.”

The 44-year-old started the book around a decade ago, writing about his whakapapa, but re-reading it again last year he didn’t like it very much - although it did help to form the basis of his novel.

Simon decided to write National Identity because he felt like he had something to say, and had time after losing the National Party leadership and National lost the election.

He went from working 100 hours a week as leader to 50 or 60 hours, and also wrote a lot of the book during the Christmas break.

“There's a saying,” he says. “If you want something done, ask a busy person.”

Simon had most of the book ironed out in around four months. Once he’d finished a chapter he’d give it to his wife Natalie, a journalist and former magazine editor, to read.

The father of three hasn’t spared his family from awkward moments in the book either. In the collection of photos there is one of Natalie sleeping with her mouth wide open.

“Let me sound a bit like a politician. It was a negotiation and in the end she consented to it,” he laughs.

“She can see that I’ve also taken the mickey out of myself. I know she thinks it’s important that we laugh at ourselves.”

Having been in Parliament for close to 15 years, Simon says he was a tiny bit tempted to write a political memoir, but it would’ve been harder to write than this book, which comes from the heart.

“I need to wait for a few more people to die first, before I can tell some of those political stories,” he jokes.

“There’s lots of things in the book that I hope other people will recognise as part of their story, and that also means something for our country.”

Regardless of how National Identity, which is available now, is received, the public figure is thrilled with his achievement.

“Whatever happens - whether it’s a big hit, a little hit, or no hit – I’ve got no regrets.

“It's something that’s really been good for me.”