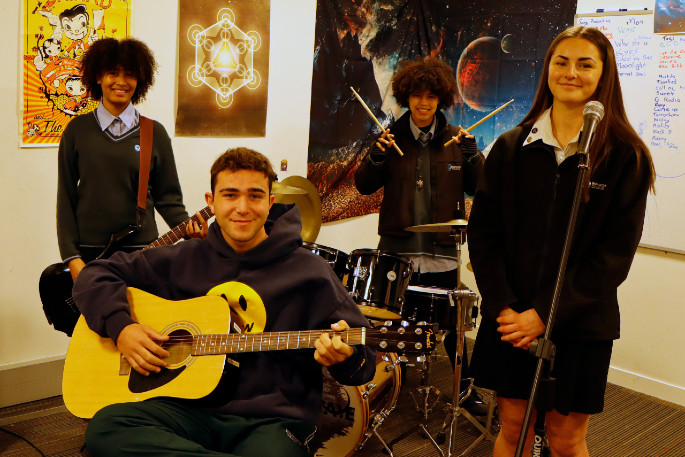 A handful of Pāpāmoa College students have found an outlet for their emotions through writing songs - but they didn’t expect those songs to be shortlisted in a national competition.

Four students, who have composed three songs, have been named as finalists in the Play It Strange National Secondary School Songwriting Competition.

They have received $750 to have their songs recorded professionally before they’re mastered for the annual album release.

Saskia Gesthuizen doesn’t study music at school, but she’s always writing songs and felt like she needed to do something with them.

“I like to put all my emotion into a song,” says Saskia “That’s how I deal with it.

“If I feel a certain way, instead of talking to someone I’ll just write a song.”

The 16-year-old’s song Complexion is about not feeling listened to. She admits she finds it a “bit scary” sharing her songs with people close to her.

“I found it easier to put it into the songwriting competition because I didn’t know who was listening to it,” she explains.

Markus Mostert writes songs daily. He also uses emotions as inspiration, as well as his friends’ and his own perspectives. The 17-year-old studies music at the college and hopes to make a career out of it. “This competition will hopefully help me to achieve that,” he says.

Sisters Jasmine and Summer Tocher collaborated for their song Teenage Refuge, with Jasmine, 12, writing the lyrics and 14-year-old Summer composing the tune.

“I pitched in a little bit on the lyrics, and by pitched in I mean gave my criticism,” teases Summer, in a way that only a sibling could get away with.

Jasmine has a unique way of writing lyrics. “I draw an image and then I look at the visual details and make a song out of it,” she says.

Markus, Jasmine and Summer have been working with Kurt Somervell as part of the school’s song writing programme, and the college had extra funds to record them.

Music curriculum leader Katrina Daniela says: “We thought while they’re writing these amazing songs and performing them, let’s enter them into the Play It Strange competition.”

There were 10 songs entered by students from the college, which has also tied songwriting into the English and literacy curriculum, so students can include their songs in their English portfolios.

“It’s been nice to have those curriculum links as well as the creative links, because some of the songs are really clever and there’s quite a bit of depth to them,” says Katrina.

“We’ve got really amazing, talented students who maybe don’t realise how talented they are. We’re finding different ways to support that talent.”

The Pāpāmoa College songwriters are joined by five finalists from Otūmoetai College and one from Mount Maunganui College, who made it into the top 93 for this year.