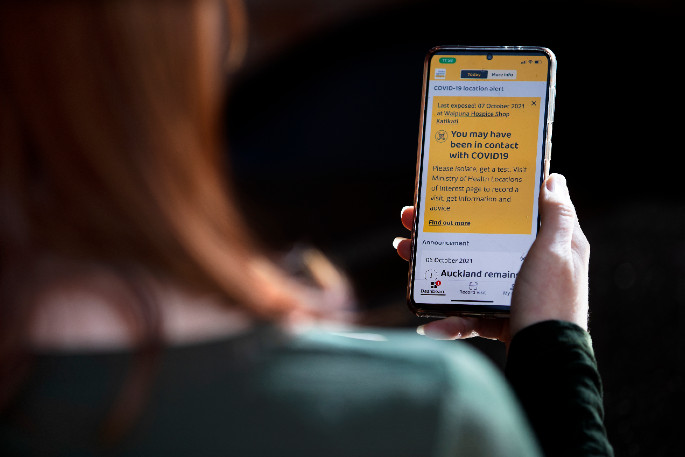 The notification on the Covid tracer app.

A Tauranga resident has admitted she didn’t know she’d been at a Katikati location of interest until a friend happened to ask her.

A regular and diligent user of the Covid Tracer app, Paula had assumed the technology was reliable enough to send her a notification.

“It wasn’t until a friend of mine asked if I’d been at the Waipuna Hospice Shop that I realised I had. She sent me the link and asked ‘weren’t you there on Thursday?’ and I said ‘oh my lord, actually I was’.”

The Ministry of Health announced the positive Katikati case last Saturday, but locations of interest weren’t made known until Sunday.

Paula’s friend read about the locations of interest online on Sunday morning, and knew Paula had been babysitting grandchildren in Katikati for three days, during which time she’d popped into the Waipuna Hospice Shop.

Paula doesn’t know when the notification arrived. “I have no idea,” she admits.

She checked to see what time she’d been at the Waipuna Hospice Shop and found a message asking her to phone Healthline.

The message read: On Thursday October 7 you have been at the Waipuna Hospice Shop Katikati. You may have been in contact with Covid-19, please isolate, get a test, visit Ministry of Health locations of interest, get information and advice.”

“My notification was yellow,” she says, “which means I was considered a ‘casual contact plus’. I’m not quite a ‘close contact’ but not as far away as a ‘casual contact’. I was asked to isolate until I got a day five negative test result. So that’s what I’ve done.

“It would have been helpful if the notification had flashed up on my phone.”

She immediately went for a test, followed by a second test on Tuesday. Both came back negative.

“It was just pure chance that I went out to babysit my grandchildren for three days, and on one of those days I went into town and whipped into a couple of shops. What are the chances?”

She continued looking after her grandchildren the following day, on Friday, October 8.

“They have to isolate until my test is negative as well,” says Paula.

Luckily she hadn’t come into contact with anyone since then.

“I only went home on Friday and I have been nowhere else, so that’s probably quite lucky.”

Paula says the situation is hugely inconvenient as she was due to go away on holiday with another granddaughter, but needed to isolate instead.

“What the hell do you do? You’ve just got to do it. I don’t want to be that person that should have got tested but didn’t.

“I just can’t believe that Katikati had its first case. I don’t go out there that often, but I just happened to be there. I was in the same shop.”