Inspired by Japan drama and theatre 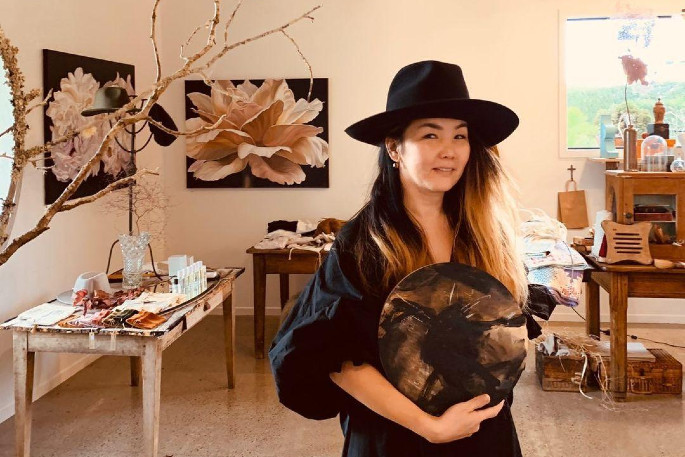 Ulemj Glamuzina’s exhibition Kubuku is open now at The Incubator, while Otūmoetai College students are currently holding their Junior Art Exhibition at The People’s Gallery.

Born in Mongolia, Ulemj came to New Zealand in 2006 after meeting her Kiwi husband, Maté, in Japan, where she was completing her post graduate studies in education and linguistics in Hokkaido, and where Maté was teaching English and snowboarding.

Much of Ulemj’s work is inspired by her time spent in Japan, and her exhibition is a play on themes of Kabuku, meaning ‘to be out of the ordinary’, and Kabuki - the traditional form of Japanese drama with highly-stylised song, mime and dance, using exaggerated gestures and body movements to express emotions.

Ulemj was inspired by a trip she made to Ginza, in Tokyo, which is the principal theatre for traditional Kabuki.
“I’m a visual person,” she says, “so I was really taken by the costumes and hairstyles. I love the Japanese style, but this is exaggerated and the masks are so dramatic. Often the masks, or faces, are painted without expression so the artist has to show emotion through movement.”

This is her third solo exhibition in the past 12 months, and Ulemj credits her job as a teacher at Tauranga Girls’ College for driving her prolific output as an artist. She sees the roles as complementary.

“Being a teacher gives you structure and sets the pace, and that’s the pace you continue with into your artwork.”

Over the past 12 months, Ulemj has had more reason than usual to be grateful for her art practice. Her husband was seriously injured in an e-scooter crash in October 2020, which saw him airlifted to Auckland ICU. He was in a coma for weeks as a result.

“Since Maté’s accident I have had more urge to create,” she says. “It helps my wellbeing - it’s like a therapy. It has a healing effect and I just love it.”