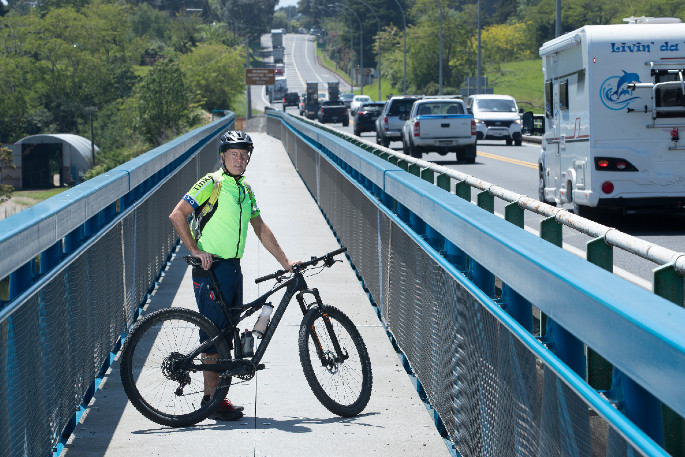 New plans for the stalled final stage of the Ōmokoroa to Tauranga cycleway don’t address the immediate safety risks for cyclists, says a cycling advocate.

The plans have been released by Tauranga City Council and construction of the cycleway isn’t expected until the autumn of 2022.

A two-way cycleway will run from Wairoa Bridge, along the upstream side of State Highway 2, towards Carmichael Road where a new signalised pedestrian crossing will be installed.

Currently cyclists ride alongside heavy traffic on the downstream side of SH2 with no separation before using the Wairoa cycle bridge.

Bike Tauranga founder Shane Plummer says exiting the cycle bridge towards Bethlehem is also dangerous as the surface is coarse gravel and riders arrive on the roadside less than 1.5metres away from vehicles.

“The risks are still there for at least six months,” says Shane. He has raised his concerns with Tauranga City Council and Waka Kotahi NZ Transport Agency.

The Ōmokoroa to Tauranga cycleway is a 19km route made up of both new and existing off-road shared paths and local road connections.

Cycleway construction began in 2016 and the clip-on cycle bridge over the Wairoa River opened in mid-2020. Construction of the last section stalled in 2019, after local iwi and land owners raised safety concerns about accessways on SH2.

Ngāti Kahu, of Ngāti Ranginui iwi, is the primary hapu affiliated with Wairoa Marae. The previous proposed cycleway would have ran in front of the marae and several other properties on SH2.

Western Bay of Plenty District Council group manager infrastructure services Gary Allis says, prior to constructing the existing cycle bridge an agreement was reached between NZTA, Tauranga City Council and WBOPDC that the preferred route included a separated concrete cycleway on the left-hand side of the highway between the bridge and Carmichael Road.

“It was agreed that the speed limit would be reduced to 50 or 60 kph at the time of construction of the cycleway,” says Garry.

“The cycleway was being constructed 100 per cent on NZTA land.”

“The decision was made following consultation with the Ngāti Kahu mandated representative and the route was supported,” he says.

“The bridge contract was then let and construction began. In parallel the design of the cycleway along the highway proceeded with consultation with adjoining landowners and Ngāti Kahu and the Wairoa Marae.”

Garry says the design was approved through a NZTA safety audit.

“The adjoining owners did have concerns around the potential risk of cyclist and turning vehicle accidents.

“In late 2019 the Ngāti Kahu representatives advised that they did not support the cycleway and the last section of the cycleway was placed on hold.”

Gary says in March 2021 it was agreed responsibility for the final section of the cycleway would be transferred to Tauranga City Council as lead agency in association with NZTA.

With the new plans, the final section of the cycleway is on the opposite side of SH2 to the cycle bridge so another one will be constructed dependant on funding.

Tauranga City Council director of transport Brendan Bisley says an “in-principle agreement” has been made between council and Ngāti Kahu.

This will allow use of some of Ngāti Kahu’s land to enable cyclists to go under the bridge and onto the cycle bridge on the other side, he says.

“The upstream side of the highway has less driveways and accesses so there will be less conflict between cyclists and vehicles entering and exiting driveways which makes it safer for the cyclists and the motorists,” says Brendan.

In a statement, Ngāti Kahu says it is working "constructively and in good faith with Tauranga City Council to establish the cycleway in a manner focussing on safety for the whole community".

"To that end, the progress we have achieved together will see a satisfactory outcome for all parties in the very near future.”

Brendan says, "The reason we've been able to achieve this outcome is NZTA are proposing to install a 50km/h speed limit from the bridge. The slower speed limit allows the cycleway with the crossing to be in that section of State Highway 2."

When asked how the crossing will impact congestion Brendan responded: “It should have minimal impact on traffic as the lights will stay green unless a cyclist wishes to cross”.

“If there is a cyclist, they will need 8-10 seconds to cross the road before the lights go green again for traffic,” he says.

Brendan says lowering the speed limit needs to happen before council can start building the cycleway.

Conflictingly, NZTA regional manager maintenance and operations Rob Campbell says they hope to have the new speed limit in place in time for the completion of the cycleway.

Rob says changing speed limits is a legal process and there are numerous steps that need to be carefully followed.

Shane says lowering the speed limit is something that needs to happen quickly to make the road safer for cyclists.

In terms of addressing Shane’s other safety concerns, Brendan says now there is an in principle agreement for a cycleway, NZTA and TCC will consider what changes need to be made in the interim.

Rob says NZTA will be undertaking some minor works to tidy up the transition from the off-road path exiting the bridge to the road shoulder, to improve safety of cyclists at this location.

“This is a challenging part of the network and NZTA recommends the section between Carmichael Road and Wairoa River Bridge should only be used by confident and experienced cyclists.”