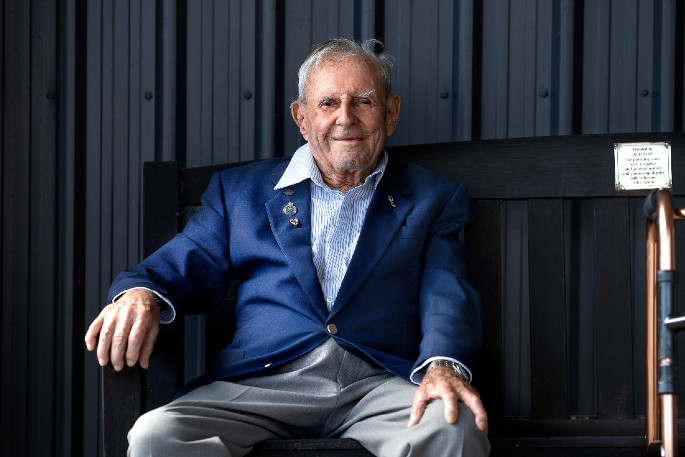 A centenarian with sharp wit and an enduring faith has said his last prayer.

Les Marsh would pray for all of his 40 family members by name, every day, right down to his three great-great grandchildren.

The Weekend Sun met Les at age 99, when he told us he planned to climb Mauao for his 100th birthday.

Unfortunately, increased fragility meant a trek up the local landmark was unachievable, but we had the pleasure of attending one of his 100th birthday celebrations.

His sense of humour was still firmly intact. Les quipped: “It’s great to see how all your good friends flock around you,” after opening birthday cards from the Queen and Prime Minister Jacinda Ardern.

Leslie Alfred Marsh was born on January 16, 1921 in Auckland. He was the second of four boys and spent his early years playing on farmland south of the city centre or out on the mudflats of the Manukau Harbour.

On completion of primary school, the 15-year-old attended Seddon Memorial Technical College where he studied agriculture for two years, with the idea of going farming.

With no suitable farm jobs available, Les took a job as a delivery boy. In 1937 he took a job at a printing press printing Christian literature.

It is a career he would come back to numerous times and one that would serve him well for his future endeavours as a missionary.

World War II had been edging closer to New Zealand for three years before Les was conscripted at the age of 21. He asked if he could join the medical core because of his faith.

While at a training camp in Te Aroha, he met his wife to be Hazel. He was deployed to New Caledonia and the Pacific for two years - all the while writing to his girl from Te Aroha.

During leave in August 1944, Les and Hazel formalised their relationship with an engagement, but their courtship was short-lived. Les was deployed to the Middle East before heading to the battlefields in Italy.

Here Les’ compassion came to the fore. He would greet dying enemy soldiers with a German greeting meaning “I’m very pleased to have met you”.

Prior to ANZAC Day last year, the veteran told The Weekend Sun: “I can remember, when we were in Italy, the enemy were really going backwards.

“They left half of their troops behind. We all picked up a little bit of German and this was always my greeting to them.

“You can imagine the smiles that came on their faces as they finally met an enemy that was a friend.”

After making it back home in early 1946, he promptly married Hazel and they settled in Manawatū, where he resumed his printing work.

The pair went on to have three sons - Lew, John and Tim - who each reflect on different elements of their father’s life.

The eldest, Lew, recalls his dad’s devotion to family, as well as his Christian activities and the times spent camping and tramping around New Zealand.

“There were many tramps in the bush, including walking the Milford Track in the pouring rain, and tramping over the Ruahine Ranges,” says Lew.

“These were fun times that we spent with dad, who was always one to push the boundaries of his physical endurance as well as ours.”

John, who would climb Te Aroha with Les every year for his birthday, remembers his dad for “his word jokes and quirky quotes - often at his own expense”.

Tim reminisces about his father’s faith and undying love for the late Hazel.

“Dad had pictures over every bit of wall space to remind him of places he had been and of his family,” he says.

“All his life he kept loving Jesus and loving people.”

Les and Hazel spent 1972 visiting Kiwi missionaries around the world, and moved to Papua New Guinea in 1974 to teach at an isolated bush Bible school for 14 years.

Living in mud, slush and tramping in the bush was all worth it because they taught people practical skills, how to read and write and shared their faith, Les told The Weekend Sun.

“We thought it was all worthwhile because eternity depends on this,” he said.

He received a British Empire Medal from the Papua New Guinea government for his years of service to the community.

In 1987 the pair retired to KatiKati, and Les continued serving the community by maintaining the town’s flower gardens. He also did return trips to Papua New Guinea.

At age 80, Les decided his yearly ascent up Te Aroha was too much, so he took to marathon running instead and ran the Rotorua Marathon five times.

He and Hazel spent their later years at Radius Althorp in Pyes Pa. Les would bring smiles to the staff and residents with his quirky jokes and continued zest for life.