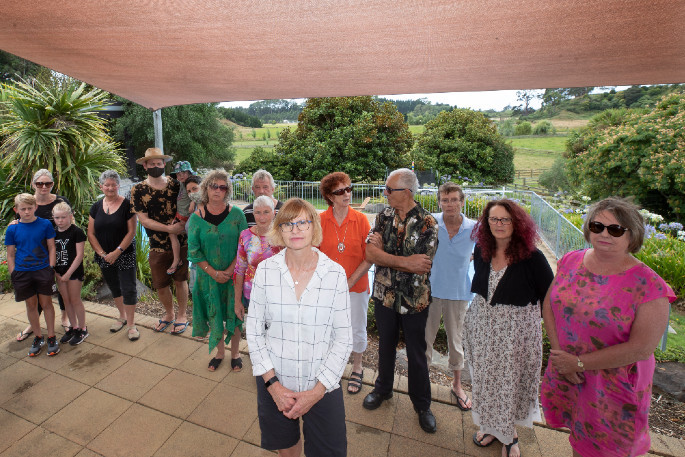 Some of the many worried Te Puna residents. Photo: John Borren.

Te Puna locals have admitted they are “stressed” about the proposition of a container facility in their backyard and are taking action.

People in the community, who have named their cause Wrong Business, Wrong Place, have formed a petition asking for the consent to be publically notified.

Resource consent for the establishment of “yard-based industrial activities” at 297 Te Puna Station Road has been lodged by Te Puna Industrial Ltd, and was formally received by the Western Bay of Plenty District Council on January 18.

“The petition is a way of saying to council ‘this will affect us’, and making sure that council knows it is a really big deal to the community,” says Wrong Business, Wrong Place spokesperson Alison Cowley.

Alison, whose property overlooks the Te Puna Station Road site, says the community are concerned about potential increased traffic and the safety of cyclists and walkers that use the roads.

“The road is already congested. A lot of people are really stressed and really worried about it.”

“We’re passionate about the area because we live here,” he says.

According to information provided by council, the proposed development is to give effect to the Te Puna Business Park Structure Plan and the site is proposed to be developed in three stages.

The first stage will consist of seven leases, and proposed activities on the site include a landscaping contractor’s base, a tiny home manufacturing business, a trailer manufacturing base and an anchor occupation by ContainerCo.

The lease for ContainerCo is what has locals worried. The company is an independent container depot with 12 branches around the country, including one in Mount Maunganui.

It provides container refurbishment, modification and storage of empty containers as well as sales and leasing. ContainerCo has a 50 per cent share allocation of Te Puna Industrial Ltd’s shares.

Alison says there are also concerns from nearby orchard owners about the biosecurity impact on their export crops of storing containers nearby.

Council planning and regulatory services group manager Rachael Davie says under the Resource Management Act 1991, there is no presumption that resource consent applications must be notified.

“Instead, in order to determine whether an application should be publicly notified, a consent authority must carefully follow statutory steps in the RMA,” says Rachael.

“Given the prescriptive nature of the statutory tests, the consent authority does not have a general discretion as to who should be notified of a resource consent application.

“It is not entitled to take into account a person’s desire to be notified, or their stated opposition to a particular proposal.

“It must instead work its way carefully through the statutory tests to determine the outcome. Failure to follow those steps carefully could result in judicial review of the consent authority’s decision by the High Court.”

Te Puna Industrial Ltd has been approached for comment but had not responded at the time of going to print.