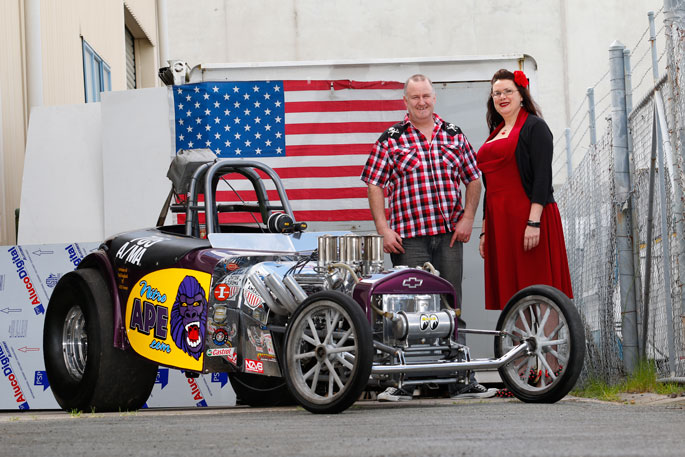 The cards were in their favour the day Andi Whitley and Craig Mullen stumbled across a 1932 Austin Bantam Roadster for sale.

Just 12 months earlier, the Tauranga couple listened to its engine roar and watched the motor fire up, as its then-owner, Sparky ‘Edward’ Horaczko, put the key in the ignition and let her rip at a car show in California.

“We had another car that was same style as this Austin Bantam back in New Zealand, so we struck up a conversation with this guy Sparky, who had the roadster in his trailer,” explains Andi.

“He said, I’m going to start the car’ – cackling the car it’s called, when you put it on a stand and start it for all to see and hear – ‘Do you guys want to be involved?’ and we said: ‘Hell yeah we do!’”

This particular 1932 Austin Bantam roadster had history – its drivers in the 1960s won a series of US races and featured on the famous Lions Drag Strip in California.

The car wasn’t for sale, and the couple had no intention of buying anything. They merely went to enjoy the show – so it was a stroke of luck that the car came on sale a year later.

“We knew the car would fit us because we had been in the car, which was really cool,” says Andi.

“Craig is a regular on the international buy, sell and exchange websites. He’s always scrolling through and keeping an eye on what’s available, just in case an opportunity comes up, and it did!”

The car stayed in the States for a couple of years, where Andi and Craig spent time racing the Austin Bantam. Craig has also raced it in Australia, meaning he’s run an eight-second quarter mile in three different countries. “It’s pretty neat,” says Andi.

So what’s it like to sit behind the wheel of a piece of history that can get to top speeds of 160m/hr – nearly 260km/hr.

“It’s wicked,” says Andi, who has been fortunate enough to be behind the wheel twice. “It’s a wicked adrenaline rush. She gives you a run for your money!”

This piece of well-crafted, highly addictive machinery is just one of an expected 100-200 drag, drift, muscle and rally cars, motorbikes and go karts set to go on display at the Bay of Plenty Drag Racing Association’s inaugural Horsepower Show on Sunday.

Held at Mount Sports Centre, on the corner of Maunganui Road and Hull Road, the event is not only designed to showcase speed machines in all their glory, but also raise support for the proposed international-standard motorsport track and drag strip at TECT All Terrain Park.

“It’s to create an awareness of the track, show the strength of the motorsport community in the Bay and how much we could benefit from the track,” says Craig, who is a committee member of the BOP Drag Racing Association.

The proposed track has been a work in progress for some years. In 2012, Sun Media reported that plans for a multi-million dollar international standard drag racing strip was given the go-ahead by the Western Bay District Council.

The feasibility report showed the drag strip development will cost nearly $8 million to construct, but that with the strip’s high-benefit cost ratio (7.5), the full capital cost will be returned to the community within the first year of operation.

“The kick back the community will get from it financially is huge, so hopefully everyone will win on the day,” says Craig, referring to the $67 million the strip was expected to put back into the region within 10 years of opening.

The Bayspeed Horsepower Show is on from 9am to 3pm. Entry is a gold coin donation to cover venue costs.