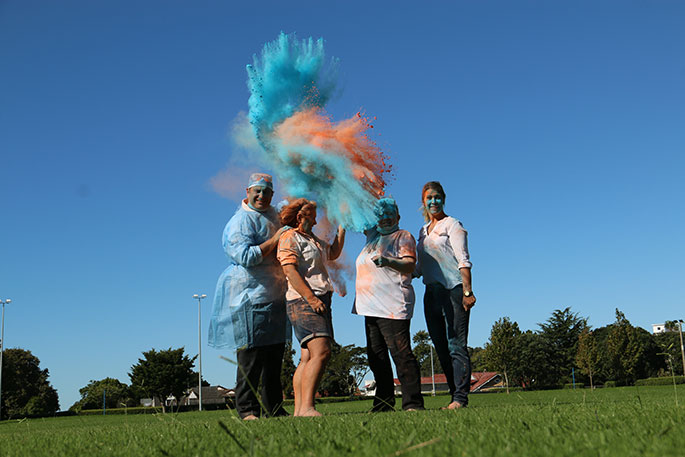 Waipuna Park will fill with colour as the Colour Dash comes back to its roots in Tauranga on Sunday, April 10.

This year, participants can walk, jog, or run a 3km or a 6km loop.

“It’s a 3km loop and people can either choose to finish after one loop or go around again,” says event manager Larissa Allen.

Dashers will be peppered with coloured dust as they run the Waipuna Park track, with five different colour stations throughout the course.

“By the end of it they’re covered in a rainbow full-spectrum of different colours,” says Larissa, and there may be a wet surprise along the way “because the colour sticks better with water”.

“We try to make it as fun as possible and it’s all done for a good cause.”

Colour Dash had its first New Zealand run in Tauranga in 2014 by Michelle Whitmore, who saw the event in the United States and decided to bring it home to New Zealand.

Since then, eight Dashes have been run throughout the North Island, starting in Tauranga and branching out to Auckland, Palmerston North, Hamilton and more.

This year, Colour Dash funds will focus on local charities KiwiCan and Project K, both part of the Graham Dingle Foundation, says Larissa.

“Because we had raised $100,000 for Ronald McDonald house during the 2014-2015 years, we’ve decided to share the love and have chosen a local charity to receive the funds,” says Larissa.

KiwiCan “teaches values and life skills,” says Dan, and has 10 participating schools in the Western Bay of Plenty.

Money from the Colour Dash will “help reach those kids in our schools that need the support the most”.

Local band Icefire will play live music throughout the day, from 9am-2pm. Larissa says the band plays a variety of music from current pop to old classics to cater for the wide range of ages expected at the Colour Dash.

“Our participants that come are quite a wide range – we’ve got kids that are two years old or even babies all the way through to 65-plus.”

“We don’t normally cap it but because of the venue we’ve decided to do it like that this year,” and Larissa. And if the 2000 participant goal is reached, she’s expecting to hand over a $10,000 cheque at the end of the day.

“As long as people come along we can give a good amount away.”

Colour Dash will run rain or shine, and Larissa says “the rain makes it more fun”.

Tickets cost from $40 per adult, and with each registration participants receive a T-shirt and a bag of colour dust.

People can also register on the day, provided there are still spaces.