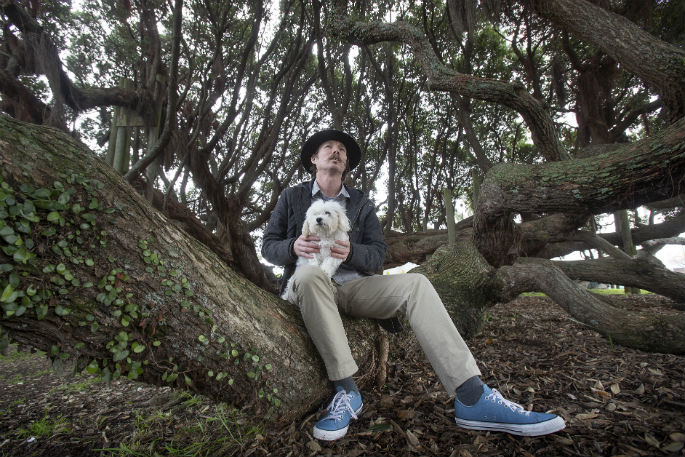 Pitau Rd resident Daniel Garrick has lived across the road from the pohutukawa for 18 years. Photo: John Borren

Mount Maunganui residents are concerned the oldest pohutukawa in Tauranga is under threat from a proposed residential development on Pitau Rd.

There are fears the proposed block of townhouses will cause floodwater to drain directly into land where the tree is, harming the pohutukawa’s health.

The tree on Pitau Reserve is estimated to be 400 to 500 years old and of particular significance to Tauranga iwi Ngai Te Rangi.

Nearby resident Don Renwick says the street regularly floods, but there is currently a large green space on 17-21 Pitau Road that acts as a soak hole for water.

The development site, which now has 400 square metres of hard ground, will have over three times that amount after it has been built.

A civil engineering assessment states that overland flow from the proposed development will “leave the site and enter the Pitau Road reserve”.

Don is concerned increased flows into the tree’s grounds will have adverse effects on the pre-European pohutukawa.

“Given that pohutukawa don't like the wet this could have an adverse effect on the tree. The developer has not even thought about the kaitiaki of the tree in their submission.”

Council parks and environment team leader Warren Aitken says the tree is on the Tauranga City Plan Notable Tree Register, which protects the pohutukawa through rules around what works can be done to the tree or within its drip line.

“Trees adapt to their natural environment. The damp ground does not negatively impact the tree, it provides the large root system with plenty of nutrients and resources to remain strong and vigorous.”

Daniel Garrick has lived across the road from Pitau Reserve for 18 years.

He says over time the ground beneath the tree is increasingly getting damper and is adamant the pohutukawa needs protection.

“It’s increasingly getting worse, and surely if the building goes ahead and more water goes into the ground, it will cause the roots to eventually rot. Once those roots are rotten, that’s a dead tree.”

Fellow resident Kimberley Renwick took to social media saying a report should be completed “investigating how this intensive development in close proximity will impinge on the tree’s roots which is intrinsic to its health.

“I hope the tree is cared for in the right way with respect to tikanga. Importantly, everyone who should be, is notified, to keep the tree’s best interests at heart.

“This pohutukawa tree is an irreplaceable part of our heritage and of significant historical value to all New Zealanders.

“I would like to be sure that kaitiaki for the tree involves the appropriate guardians who can act on the tree’s behalf to look after it, not kept under the radar by commercial enterprises.”

Tauranga City Council spokesperson Barbara Dempsey says at this stage no direct link between the proposal, the proposed development and potential impact on the health of the tree have been identified.

“As part of the application process, the effects on the environment in the proposal will be considered by council where they have discretion.”

Warren Aitken says any works outside of minor pruning are not permitted and a resource consent is required.

“The resource consent process enables council to manage any adverse effects on the tree and allow for remedial and safety works.”

Warren says pohutukawa grow on pretty much any environment in New Zealand and require sun and rain to remain healthy.

“With two massive canopies, the large root systems will probably extend far beyond the canopies.”

Property developers TYBI Limited consultants Boffa Miskell declined to comment on the matter.
It says this is a resource consent application, following the RMA process.