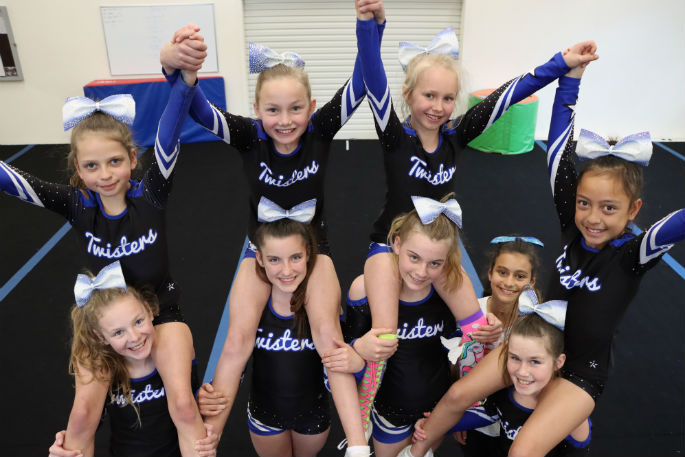 Members of the Bay Twisters squad celebrate their success at the Cheerfactor contest on the weekend. Photo: Daniel Hines.

“Cheerfactor was a massive competition,” says Bay Twisters chairperson and founder Rebecca Grigson. “It started at 8.15am on Saturday and went right through to 9.15pm that night.”

Hundreds of athletes came from across New Zealand to compete in the competitions which were hosted by Cheersports at the Barfoot & Thompson Stadium.

“The competition was tough,” says Rebecca. “Bay Twisters have been working hard all year and thanks to their dedication and passion, and new Head Coach Paul Curley’s support and teaching skills they have bought home some amazing top awards.”

Paul, from Ireland, has been working with the club during 2019.

He is one of the most hardworking and dedicated coaches we have ever had the pleasure of working with,” says Rebecca. “He goes above and beyond his duty as coach and we are super lucky to have him here.”

Bay Twisters are now focusing on the NZCU Cheer Nationals to be held in Wellington in October.