“You still won’t listen to us” 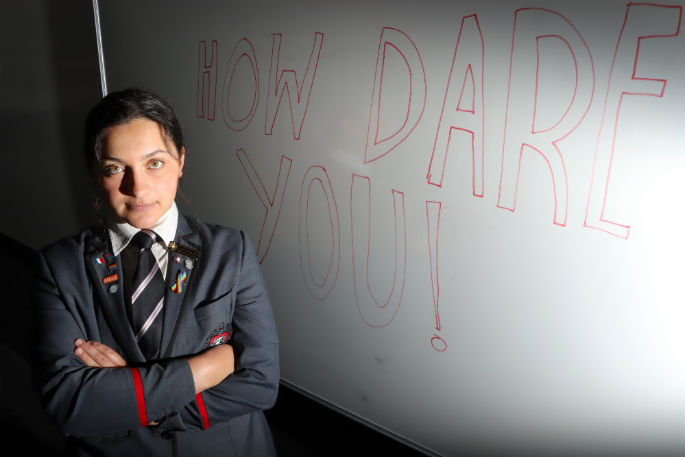 “How dare you” – strike convenor Zoe de Malmanche and echoes from the UN.

Her history teacher probably captured the essence of it all.

“You know Zoe, he said, what you are doing is much more important than history. You are making history.”

Zoe is Zoe de Malmanche, 17-year-old Mount College pupil, and convenor and driving force behind SS4 Climate – today’s strike by schoolkids demanding climate change action now. Not only was the history teacher giving his blessing to Zoe’s absence from history class, he was probably quietly proud.

And when the strikers, most if not all born this century, take their concerns for the world onto the Strand today [midday], Zoe de Malmanche will be out front with the big banner. “We demand climate change now.”

Who is this kid of French and Maori descent, this kid with a worldly conscience, this kid who will next year probably study law, political science and public policy so she can stay in the political sphere and do something about climate change? “Something I know I love doing.”

Today’s strike was no moment of whimsy, of playful fancy. Zoe’s world is facing a catastrophe and she was stepping up to save it.  Zoe de Malmanche is a self-confessed – “probably a greenie, yes” – and driven by policy not party.

“People will say I have been indoctrinated by my parents. My Mum was always conscious of her environmental impact. She wouldn’t buy packets of chips from the supermarket because of all that single use plastic. And I’d get so upset about it. Why can't we just be normal? I wasn't in denial, I was one of those people where it was much easier not to bother with things like that.”

Mum de Malmanche was educating Zoe – “I am doing this for your future,” she would say. Then when teenage Swedish activist, Greta Thunberg skipped school and clambered onto the world stage demanding action to secure the planet’s future, here in Tauranga Zoe de Malmanche sensed something serious going down. “I thought, hang on, this is my future.”

And when baby boomers suggest she belongs at school, that there’s a good reason the world doesn’t look to teenagers for guidance on fraught issues of public policy, Zoe de Malmanche calmly steels herself. “Well, we go to school and we learn and you still won't listen to us. We are taught stuff you weren't taught, we’re listening to stuff you won’t listen to because it's easier.  It's much easier to bury your head in the sand and not do anything about it.”

She feels she has heard every counter-argument under the sun and it shocks her. “What are you trying to tell us, that we don’t have a future?” She says there’s Sir David Attenborough, arguably one of the most educated scientists in the world, and we still won't listen to him. “So it's like what can we do?”

Protest, and continue protesting. “We have a history of protest in this country, we have the right and the ability to protest, it’s in our blood. And we have got to the stage it is the only way for our voices to be heard.”

Then this week Donald Trump’s sarcastic tweet in response to Greta Thunberg’s provocative, defiant and now celebrated “how dare you” speech to the UN in which she slammed leaders for praising young activists while failing to deliver on climate change.

“Seems like a very happy young girl,” said the POTUS. “Looking forward to a bright and wonderful future. So nice to see!”

Zoe de Malmanche is personally affronted. “Was he actually listening to what she was saying? Greta delivers this really emotional, thought provoking and powerful speech and that's his response. How pathetic, how embarrassing. And from a world leader.”

Zoe has some 17-year-old wisdom to impart. “When you create a conversation, people start asking questions, then they start learning, and then they start doing something about it.” It’s a damaged world but you feel it’s being passed into good hands.