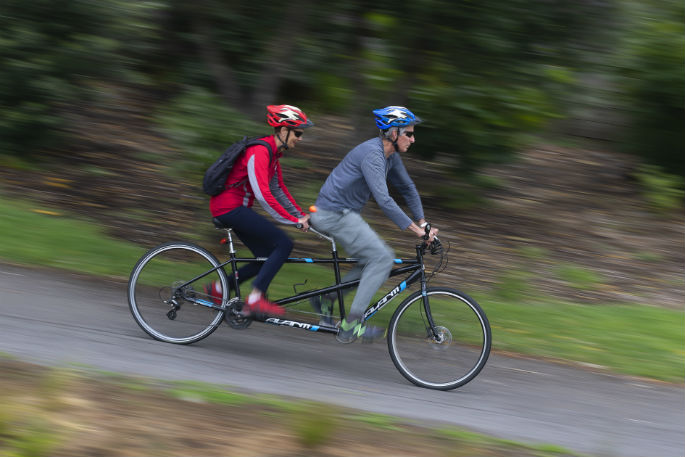 David Higson and Yvonne De Winter feel the wind on their faces on their tandem bike. Photo: John Borren.

Five hundred and ten kilometres, 11 riding days and a sore bum every day.

But Yvonne De Winter says the legs were good and she could have pedalled on.

“From Bruges to Paris,” says Yvonne. “I was exhausted but still happy to do it. And I did it.”

And while the personal accomplishment is, on its own, impressive, what sets this international cycling tour apart is that it was done on the back of a tandem. And the cyclist, the stoker as they’re known, is blind.

“The wildflowers on the side of the road – they were in full flower and stunning – bright pinks, yellows and purples. It’s just an atmosphere sense I guess. You just sense things.”

Assisting Yvonne to process all those images and sensations was the bloke up front on the tandem – Yvonne’s cycling partner and partner in life, the captain in tandem terms, David Higson. “We would pull up on the side of the road and while I was smelling and holding and feeling the wildflowers, he would be describing them.” Simple. And lovely.

And there were the wheat fields, the sunflower fields, forests and beautiful little villages which are all registered indelibly in the mind and imagination of this cyclist deprived of what most would consider a crucial sense for touring.

“Cycling is an amazing way to have a holiday,” says Yvonne. “In a car, coach or train, the world whizzes by.” No chance to smell the wildflowers or fresh air or feel the sunshine and the wind in her hair – which is all very doable for a blind person on the back of a tandem.”

David and Yvonne overnighted on a barge. They would climb on the tandem at 9am with 13 other Dutch, German, American and Australian tourists, cycle 50 or 60 kilometers a day and catch up with the barge further along the canal or river. “It’s about people and conversation and food.”

Yvonne did enjoy 17 years of seeing before a car crash robbed her of her sight. “I know there are some things I miss out on, but I don’t dwell. And if someone describes the scenery then I can automatically visualise it because I have seen it before.” She has a memory store of images. “And so when David tells me there are swans on the lake, I get it.”

Sometimes she needed little prompting. Like when they pedaled up to a WW1 cemetery at the Somme. A sighted person would see a mass of white headstones, each with a story. But it didn’t require 20/20 to get a sense of this occasion.

“David read a couple of epitaphs and I felt so inadequate. I felt like I wanted to give them a hug – say sorry and thank you. It was a nice reminder of what they did for us.”

A second cycle tour took them from Passau in southern Germany to Vienna along the banks of the Danube. Yvonne has images of river boats and barges, ducks and swans. But the experience she recalls is one of sound. “At times we must have been only one or two metres from the edge of the Danube because I could hear the waters lapping.” She has stored that sound away.

Did people have to make allowances for a blind person on a cycle tour? Yvonne’s a little affronted at the suggestion. “They didn’t have to.  But they might have ducked out of my way when they saw me coming.” She laughs.

And if she was in the lounge first thing she would say good morning to test if someone was there and then ask them to make her a coffee. “They always did, so no-one minded.”

And she refuses to let an injudicious question take away from the memory. “It was an absolutely amazing experience. The real way to have a holiday.”

The have ticked off the Otago Rail Trail and the Coast to Coast - the Bay of Islands to Hokianga. In February Yvonne and Dave are back on the tandem for the Alps to the Ocean ride – Mt Cook to Oamaru.

“It’s being out there in the open, in the fresh air and amongst nature. And for a blind person that’s a wonderful sense of freedom.” And not once during that European tour did Yvonne think it would be nice to sit up front on that tandem and steer the ship, decide where and when.