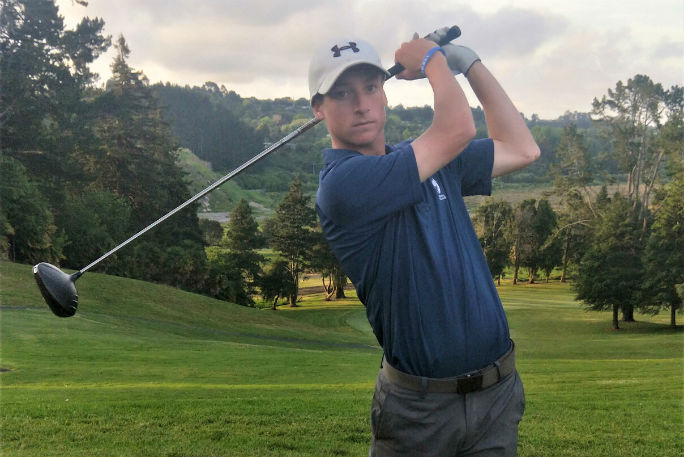 Mitch Kale may have lost the New Zealand Men’s Amateur golf title but his blistering start to the 36-hole final will live long after the final putt was holed.

The 18-year-old Tauranga Golf Club member stunned his more experienced opponent Sam Mitchell from Taranaki with an eagle on the opening hole and then a hole-in-one eagle on the third.

On the par-five first hole Mitch drilled a 40-foot putt into the back of the cup for a three. After the second was halved in pars Mitch stepped up to the 170-metre par-three third.

With perfect contact he sent his ball arcing towards the pin and watched in delight as the ball disappeared into the hole for just the second ace of his short golfing life.

“I had a six iron in my hand and hit a nice little draw in there and it managed to go in. After that start it is sort of hard to calm everything down I guess but it kept going nicely after that.

“It was not until later in the round when there was a big momentum shift and that is credit to Sam and the way he played.”

Mitch was three-up on the 16th green where he missed a very makeable putt that would have put him four-up. If he had made the putt who knows if that may have been the match over.

But it was certainly a key moment as Sam won the next three holes and took control of the match.

Mitch finally was beaten on the 33rd hole but not before giving the New Zealand golfing community a new name to look out for in years to come.

He says the biggest learnings he took from getting so close was staying in control when things start to heat up.

“I think it is much more of a learning experience losing in that final. I just let things slip a little bit in the second round on that back nine.

“Obviously you always go into a tournament wanting to win it. I guess if you told me at the start of the week I was going to be in the final I would have backed myself to make it but the odds weren’t in my favour. It was unbelievable to get that far and I definitely gave myself a real chance of winning it.

“I really want to make it in golf. I enjoy the process of getting better which is the real big thing.”

Mitch is the first BOP player since Brad Kendall to make the NZ Amateur final.