“Too bloody busy to grow old” 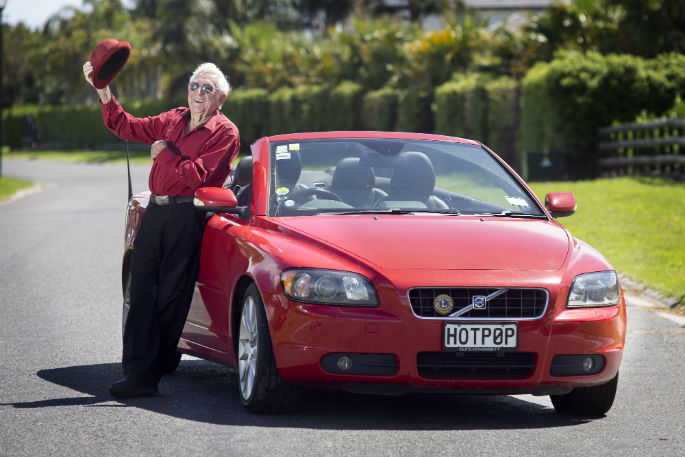 He was born on Black Tuesday.

Not because the world was aghast at the arrival of Brian Patrick Cotter, but because it was the first day of the Wall Street crash – the devastating financial collapse, the beginning of the great depression.

“And I have been blamed ever since.” In fact, the money markets must shudder every time Brian has a birthday. Two days before he turned 58 there was Black Monday – the sudden, severe and largely unexpected global financial collapse of 1987. “Around my 68th birthday there was the Asian collapse.”

“My advice is, before my 150th birthday, sell your shares ‘cause it’s going to be one helluva crash.”

And that’s where Brian’s book began – he was fiddling with a family history with a working title “Waiting for the next Wall Street crash.” It metamorphosed into a life and times yarn about a man who has been many things and done even more things. From grubbing thistles to fatherhood, from entrepreneur and dance promoter to insurance salesman, philanthropist and businessman, from rural radio jock to city councilor and playing a significant role in saving the art deco face of Napier to published author at 90 years of age.

But always the showman, always putting himself out there. Still does. He’s the Harry M. Miller of Matamata where he spent a chunk of his life before moving over the hill to Papamoa. “Yeah…” He ponders the comparison to the late great Kiwi born impresario. And quite likes it.

And a tad flashy? “Yeah, a bit flashy.” A bit ostentatious? “Oh yes, that’s me I suppose.” There’s more bling than a gypsy tinker. An oversized turquoise ring that’s weapon rather than ring – it keeps clunking things. “It’s not a stone it’s a nugget.” A manufacturing jeweler told Brian it’s the biggest he’s ever seen.

“They used to call me Bojangles down at the bowling green.” He hoots with laughter. He enjoys a reaction. And it’s endearing that he appreciates how others may see him. “They probably think I’m a bit of a skite.”

And the car. Oh yes, the car. When others of ten decades are driving walking-frames or modest Toyota shopping baskets, Brian will drop the soft top on his very bright red, late model Volvo C70 cabriolet and mosey out of the retirement village to get some wind through that naturally occurring cows lick.

You can understand how he might stir equal amounts of cringe and embarrassment and envy around the village. “Get over it. I like what I do and who I am.”

The book. It’s called “Too Bloody Busy to Grow Old” – says it all about the man. Even as he was explaining the myriad of dates, events and people crammed into the 248 pages of his life to date, Brian Cotter is on the computer compiling a play list for his five-hour Saturday morning show on 1XT community radio, Village Radio. Forever the showman.

He cut his teeth on leg ropes and horse reins, as he puts it. Then there was a commission job with the Government Life Insurance. He ran community balls and king carnivals, ran an A&P show for a few years and organised dances in Matamata when his daughter told him there was nothing for the young people to do. It simply tells us this is a man who has packed a lot in, could do anything and would do anything.

He ran “cowshed radio” – a rural programme from 5am to 7am out of Hamilton. He recorded milking machines, hoses and bellowing milkers as a bed of background noise to give his show reality. When the wrecking ball was attacking Napier – “old buildings need to come down was the attitude” - the city’s new public relations machine, one Brian Cotter suggested they might be destroying Napier’s point of difference. Today, maybe in part, thanks to Brian Cotter, art deco lives on in Napier. He also became a city councilor and, he says, could have been Mayor.

In his introduction to Brian’s memoir guitarist, promoter, producer and entrepreneur Gray Bartlett says “only rarely in one’s life do you meet someone who has the charisma, knowledge and savvy to turn an idea into a great result.” Brian Cotter is that someone.

But be wary when Brian Cotter says “there’s a story behind that”.

Because he will proceed to tell you with attention to the minutest detail. And it will take a lump, bigger than that turquoise, out of your own life story.