Going up the wall 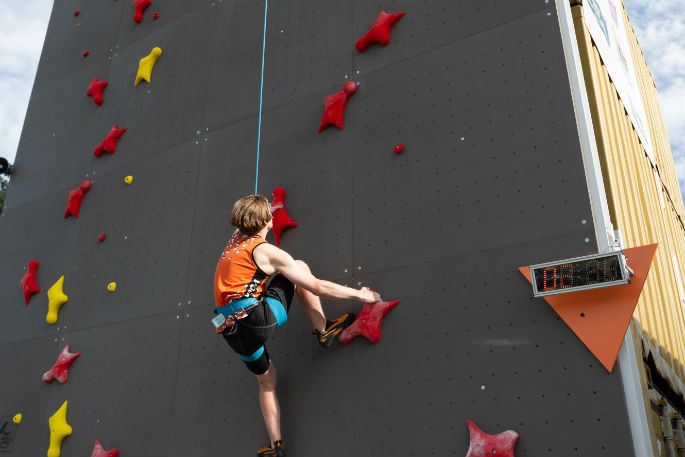 Hopefully the Black Caps won’t give reason to drive anyone up the wall at Bay Oval.

But the wall will be there just in case.

The new 16-metre climbing wall at Blake Park, right next to the cricket oval, is just one of two speed climbing walls in Australasia to be built to Olympic specifications and is a significant milestone in the future of sport climbing, an exciting new sport in New Zealand.

“In the past, New Zealand team climbers have had to travel to Noumea to train,” says New Zealand head coach Rob Moore.

“We have started to do well at world cups despite not having a wall. So I am really excited to see just how far we can push it now.”

Soaring 16 metres into the Mount Maunganui sky, the structure is six metres wide and supported by eight shipping containers on a 400mm reinforced concrete pad.

“It is incredible to watch,” says Rob, who was one of the main drivers behind the two-year project.

“Speed climbing is different to other climbing disciplines in that it is easy to understand. It’s a simple race to the top and the winner is the fastest."

The wall was finished just in time for the Bay of Plenty Sport Climbing Association to host its Olympic format combined national champs. A New Caledonian had the fastest time of 7.5 seconds. But the fastest climber in the world is an Iranian at 5.48 seconds.

With the first cricket test between the Black Caps and England happening nearby, the general manager of Bay Oval, Kelvin Jones is delighted at the additional drawcard.

“If the kids need something else exciting to do, apart from the cricket, there’s now the climbing wall.

“They’ll get to do that during the match and get a special view of things if they get to the top.”

The new attraction was funded by TECT, NZCT and Pub Charity. There was also a significant donation by an anonymous benefactor.