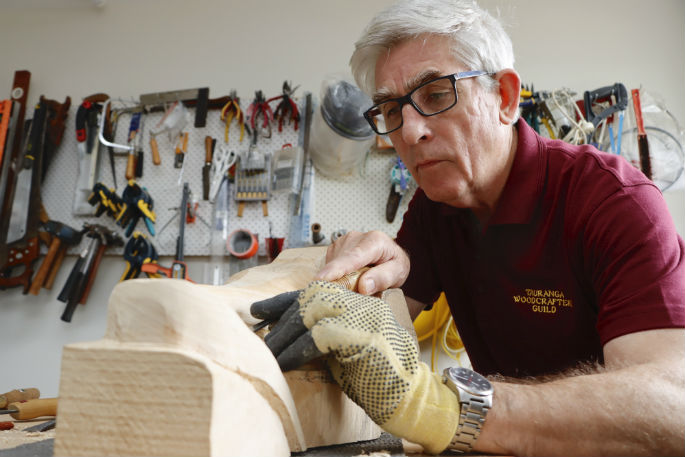 A new creation takes place at the hands of Phil Hansen.

The doing is the pleasure for Phil Hansen.

“I don’t do it for the completed object, rather it’s getting there, the conceiving and taking it all the way to completion.”

The retired engineer, a man who worked in heavy industries like mining, pulp and paper and oil and gas, is musing on his enjoyment of wood. And especially wood carving.

Phil and some of his creations will be at the Tauranga Woodcrafters Guild exhibition at the Mount Sports Centre this weekend.

“I worked in Canada for five years and we went to a craft show. My wife told me she had bought a birthday present for me, a ticket to go learn wood carving.” He still has the Father Christmas he made during those lessons.

First, the pre-cut blanks where you draw a front view of the object and a side view on the other face. Then a band saw is used to quickly get rid of the bulk of the excess wood.  “Then I took to it with chisels and knives to do the final shaping.”

He’s also had several more years of enjoyment and refining his Father Christmas skills. “There are parallels with my engineering because I am very used to reading engineering drawings which represent 3-D objects.”

“Some wood is beautiful, particularly good carving wood like kauri. Tasmanian blackwood and the gorgeous black and white stripes through it.”

From Phil’s perspective the Woodcrafters Guild exhibition is to expose people to the pleasures of woodcraft. Phil could talk about it but he suggests visiting the exhibition to see for yourself.

Another woodcrafter Mel Yeates took up the hobby so he wouldn’t go bonkers in retirement. The former fridge engineer – “coolhouses and that sort of thing” – bought himself a lathe and started making things. During three years it has grown to the point his wife has told him she doesn’t need any more wooden bowls.

When The Weekend Sun called he was headed out into the carport to make something – “A wig stand actually – we give them away to people doing chemo”. Now he’s into pens – he buys the mechanisms and makes the barrels from totara.

At the Woodcrafters exhibition there is the opportunity to have a go with the equipment, lathes, scroll saws, guys doing carvings. “There are two guys on lathes for three days,” says Phil. “Top flight New Zealand wood turners who do some beautiful work, showing people what they can do.”

There will be trade exhibitors at the show, with wood working equipment and tools and there will be the club guys selling their work.

The Tauranga Woodcrafters Guild exhibition is on at the Mount Sports Centre, corner of Maunganui Road and Hull Road, from November 22 and both days of the weekend between 10am and 4pm.

Right next door at Bay Oval, there will be a cricket test happening. “Pop into the woodcrafters exhibition during lunch and drinks breaks,” suggests Phil.