TCC hovering over control of buses 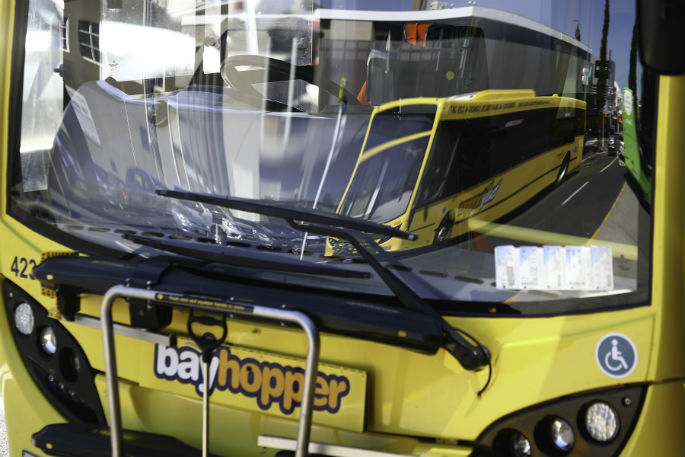 Control of the big yellows – who stands to gain?

The Government has cleared the way for the Bay of Plenty Regional Council to divest itself of the problematic Tauranga city bus services and for Tauranga City Council to take control.

“I think it’s important the buses come under one authority,” says Tauranga Mayor, Tenby Powell. “And if you want my personal opinion, I would prefer the TCC owned it lock, stock and barrel.”

But that will be up for discussion between the two councils.

At the moment the Bay of Plenty Regional Council runs the buses and the routes, and the Tauranga City Council is responsible for the infrastructure like the bus stops. “It simply doesn’t work,” says Tenby.

Previously such a plan was prevented under the Regional Council Act, but the act has been amended, paving the way for an opportunity to have that discussion.

“The advantages would be significant,” says the Mayor. “The city would be much better off. We would manage the contract and everything that comes with it under one roof. At the moment two authorities are trying to manage 50 per cent of one whole which means a lack of co-ordination. It doesn’t necessarily work well.”

Former Mayor and now regional councillor Stuart Crosby agrees there needs to be “closer alignment in delivery of the bus service,” but suggests there doesn’t need to be one entity owning it.

“I have been of the mind for some time that we should develop an integrated bus centre that both the regional and city councils co-habit and can still be paid by the same employer. That would bring closer alignment.”

One option is to use the new legislation and transfer control of the buses to the TCC or transfer the infrastructure to the BOPRC - one or the other. And that’s the discussion to be had.

But Stuart agrees that if one entity ran the buses, there would be stronger integration.

At the moment the buses are funded by a NZTA subsidy, the fare box and targeted rate imposed by the regional council on Tauranga ratepayers. The infrastructure is funded in part by the ratepayer and “quite a good” NZTA subsidy.

But how would things change out on the road if the TCC took charge? Would a transfer of control coax commuters onto largely empty “big yellows” charging round city streets?

“We are working very hard to learn why that is and the lack of alignment certainly seem to be, in part, the problem.”

The Mayor says the TCC needs to make buses a more viable option – “a more normal modus for the people who choose to use them. We would hope we can encourage more people onto the buses with a service that will enable them to do so. That’s the plan”.

Stuart Crosby says he would strongly advocate for continued investment in a public transport system that works for the community and alleviates congestion on our roads, regardless of who runs it. “I am sure if we had a system that worked for the majority of people, then they would use. But we haven’t got it right yet, not by a long shot.

“We are looking at smaller buses, we have a lot of students using the buses, and we are proposing free fares for school kids – that will make a big difference. But the whole public transport system is a work in progress.”

A priority will be that discussion to decide who controls the city’s bus services - the regional or city council.