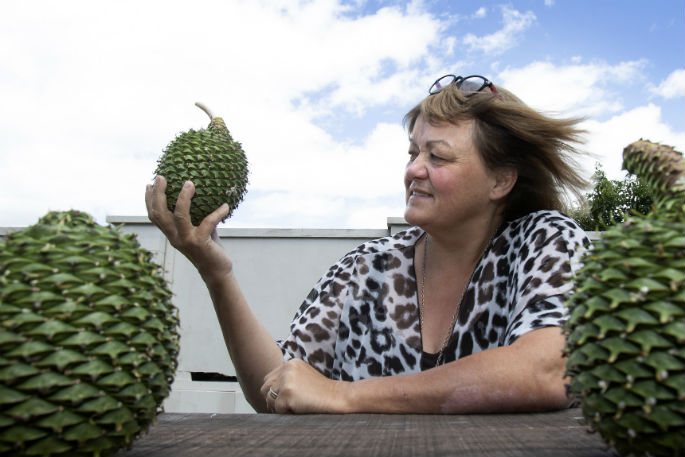 Tauranga resident Carole Meredith is warning people to watch out for falling pinecones from Norfolk Pines in Mount Maunganui.

Pinecones “heavier and harder” than pineapples fell from trees in Mount Maunganui on Monday as strong winds swept through the Bay of Plenty.

A Tauranga couple had a near-miss with the pinecones as they were looking for a sheltered spot to eat their lunch on the beach.

"We were sitting under a Norfolk Pine on the Mount surfside, but decided to go back to our car and eat lunch due to the wind," says Tauranga woman Carole Meredith.

Moments after they reached the car, a huge pinecone fell extremely close to where they had been briefly sitting.

"They sounded like bombs and fell very fast from quite a height."

The couple is now warning people to be cautious when underneath the trees in strong winds. They say the pinecones have the potential to cause "serious damage”.

“I wouldn’t even stand under the trees because they came from such a height and at a fast speed,” says Carole.

“It would knock you out. Be very careful being under the trees, even parking a car under them, they would be badly damaged."

Tauranga City Council will assess all of their Norfolk Pines in high profile sites this month and remove cones if they pose a risk, says parks and environment team leader Warren Aitken.

He says there have been no previous injuries reported but reiterates that people still need to be careful underneath the trees.

“With these strong winds, we advise people to be careful under any trees but especially Norfolk Pines.

“If you plan to sit underneath one for its shade, check to see if there are any cones and if there are keep your distance from the drip or fall line."

When cones mature, they generally dry out and fall apart while attached to the tree, Warren says.

"They are only likely to fall out of the tree due to high winds or overloading,” he says.

Winds were forecasted to reach 61km/h on Monday, January 6.