Art takes to the streets 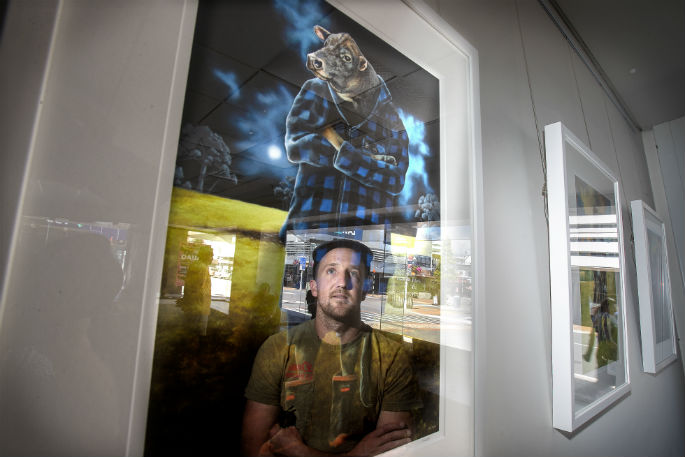 Tauranga artist Shane Walker will be working hard over the next few days to complete a large-scale mural for Street Prints Mauao in Downtown Tauranga. Pictured is his work titled ‘Boris’ which features in the pop-up exhibition for the street-art festival.

A street-art festival is putting Tauranga on the map for being more than just a beach city.

“After this festival, there will be more street art in Tauranga than any other city in New Zealand. That’s the story we want to tell.”

Those are the words of festival co-director Jah Smith, who is striving to tell stories of Tauranga and beyond through street art.

Street Prints Mauao kicked off on Thursday morning with a powhiri at the top of Mauao.

The week-long festival will see 20 murals painted by local and international artists across Mount Maunganui, Downtown Tauranga and Te Puke.

For the third Tauranga festival, artists will create large-scale works based on the Maori proverb “Ahakoa he iti, he Pounamu – Although small, it is precious.”

This is local artist Shane Walker’s first year painting for Street Prints Mauao. He’s getting geared up to spend the next few days “flat-out painting” at a site in Downtown Tauranga.

“It’s going to be hectic, I’ll most likely be painting for about 10 hours a day for the next five days,” he says.

“Street art livens up dull spaces. Plus you get to unleash that crazy part of your brain and put a smile on people’s faces – that’s why I do it.”

Shane reckons keen painters should witness the paintings as they evolve, to get a better understanding of the process.

“Come in early in the week, then come back later on. People need to know these murals don’t just pop up overnight.”

Alongside the murals, the festival kaupapa involves free workshops, a pop-up art space, youth mentoring, an art auction and an apprentice programme in collaboration with Toi Ohomai.

“Sometimes we see the separation between nationalities, or people who are working and people who aren’t in Tauranga. Outdoor murals have no prejudice – they are for everyone to experience,” she says.

“It helps us be together as a unified front, and that’s exactly what Tauranga needs.”

The Spring Street Carpark came alive with colour on Friday as part of a community art mural led by international street artist Askew One.

Members of the public are encouraged to take part in the project until Monday, with Jah saying he expects hundreds to turn up.

Jah says involving community in the creation of murals, gives them a sense of ownership over the works.

“We want them to be proud of murals, take care of them and show the paintings to those who visit Tauranga.”

“We want people to come into this city not just to come to the beach, but to check out the cool art,” says Jah.

“Our local artists need to be seen; they are good at what they do. Hopefully, we can be instrumental in helping them grow,” adds Lovie.

Five artists from Tauranga are getting stuck into painting this week and international creatives from Ireland, USA, Greece, Italy and Australia are also getting involved.

The pair have previously run street-art festivals in Whangarei and Christchurch and later this month are hosting one in Palmerston North after being approached by the local council.

When asked about the driving force behind the series of street-art festivals, Jah’s answer was simple.

“Every year we wonder why we do it, but after it’s done we realise it’s the best thing ever to see people enjoying art.”

However, the Tauranga event is different for Jah.

“I am from Ngai Tamarawaho. I have a strong connection to the city in Tauranga, my ancestors are from this land. We want to make sure that we are doing the right thing.

“We hold a powhiri on top of our sacred mountain, to acknowledge the tangata whenua and Mauao. Local iwi and hapu also need to feel like their stories are being told,” says Jah.

Lovie reiterates that whenever they host a street-art festival, their first port of call is always tangata whenua.

“We don’t just go into an area and paint, we acknowledge who the tangata whenua of that land is. It’s important we connect with them before anyone else,” she says.