That’s quite a run 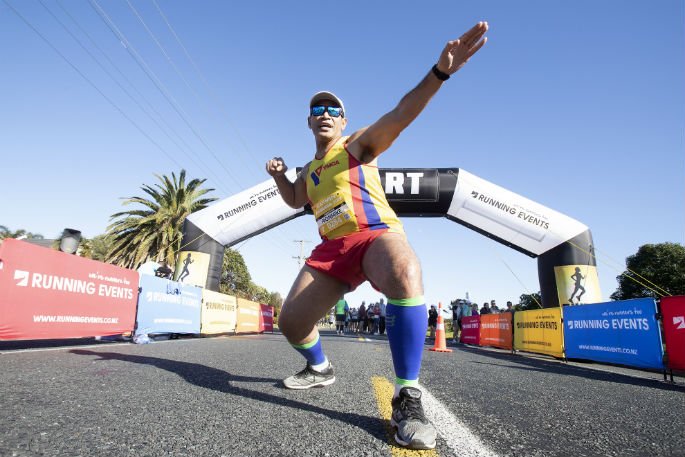 ‘IronMike’ Stowers is stoked after completing the Tauranga Half Marathon earlier this year. Photo: John Borren.

‘IronMike’ Stowers has run more than five kilometres, every day, for the last 2116 days of his life.

He hasn’t had a rest day since April 1, 2014, and the motivated Tauranga Half triathlete says he has no plans to stop his run streak anytime soon.

Michael competed with the Port of Tauranga team ‘Three Fingers’ last weekend, ironically participating in the cycling component of the triathlon.

But immediately after cycling 90km in under 2 hours 50 minutes, he warmed down with a 10-kilometre run. “I had to run afterwards, just to keep up my streak,” says Michael.

“I’m part of Streak Runners International and right now I am 48th in the world for running continuously.”

Michael’s running journey started after he was put forward for an obesity study in April 2014 by his doctor. Back then, he weighed about 128kg.

“The master’s student running the study was doing a run streak, and she had done it for one year and one day. I just followed her lead.”

Now, he’s down to 101kg and last year competed in six marathons, five half-marathons and one IronMan event.

The NZ-born Samoan is striving to run a marathon in under 4 hours and 30 minutes in 2020. “My fastest time is still ahead of me. I can tell that the lighter I am, the faster I am getting.”

What keeps IronMike motivated to run? He puts it simply.

“I’m a role model for Maori and Pacific people, to get them outside and keep them fit. My father died at the age of 62 from heart disease.

“I want to show them that even just a 30-minute walk after dinner is an important first step. It’s important to get into healthy habits and to get some green-time outdoors, breathing in the fresh air.”

Michael currently runs six kilometres each day, making time for it in the early morning before work.

He has four children and runs his own chartered accountant business in St Helliers, Auckland.

“It’s hard having a full-time business, a wife, four children and keeping up the run streak. But I make it work.

“I try to run at about 6 or 7am. But if I have an early morning meeting, then I just run home from work that evening.”

He plans to run a minimum of 2020 kilometres this year, which doesn’t include the long list of running events he has in the pipeline.

Despite not living in Tauranga, Michael says he visits several times a year for the Tauranga Half, Tauranga Half Marathon and Tauranga Marathon.

“The beauty of a run streak is that wherever I travel around New Zealand, I always have to go for a run.

“It’s a good way of getting insight into somewhere you wouldn’t normally see, rather than just being stuck in a car driving from place to place.”

Those keen to get into exercising need to use their time wisely, says Mike.

"Everyone one of us has got the same allocated hours in a week - 168 hours. Use that time wisely, don’t waste it on social media - I just want to encourage people to get outside."

But surely Michael has had one rest day since April 1 2014? “No. I have not rested one day since then.”