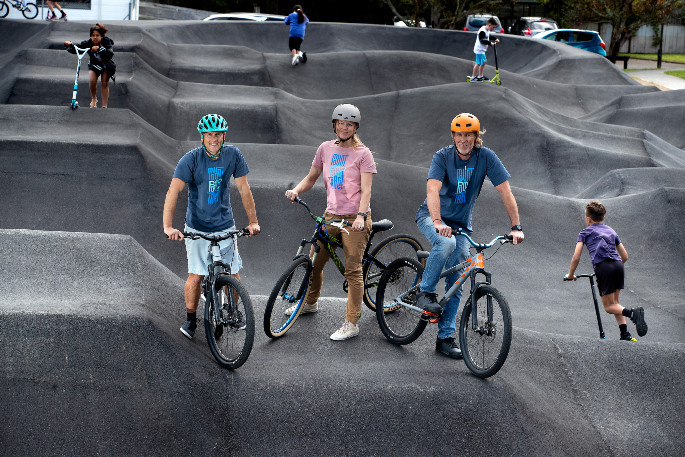 Years of hard work have finally paid off for two Mount Maunganui dads with the Arataki pump track now finished.

Kids can be seen biking, skateboarding and riding scooters around the undulating asphalt track.

James Petterson and Paul Wacker decided they needed something in their neighbourhood to get kids outside and off devices.

James says it’s not only kids but adults using the track and it’s such a buzz to see it finished.

It is one of the largest asphalt pump tracks in the country and is designed to cater for all ability levels.

One side is designed for beginners, there’s an intermediate side and advanced circuit through the middle.

“This is called a progression pump track, which is quite different to a conventional pump track in that it has all of these different features for different rider ability levels,” says Paul.

Conventional pump tracks are a continual loop designed for one ability level, he says.

“We really wanted something that kids can come to with very low confidence, right up to a very high level. But it's amazing to watch how quickly the kids jump up the levels.”

They hoped the track would open in July but wet weather, COVID-19 and a need for specialist asphalters from Auckland delayed construction.

All 230 tonnes of asphalt were wheelbarrowed onto the site and laid by hand because of the sloping landscape.

Paul’s partner Jane Asbury has also been involved in the construction by cutting and fitting the geotextile fabric that went below the gravel and asphalt.

She says it’s great to have a community asset that gets people fit and costs nothing to use.

Their children have been getting up early to get to the track before the wind picks up and to enjoy it without crowds. They’ve sometimes been going three times a day in the two weeks it’s been open.

Another goal is to increase a sense of community and James says it’s great to see kids looking out for each other.

“The kids, they’re all over it, there’s never arguments or anything down here, they just figure it all out.”

Work began about two years ago when James and Paul had a vision for the track.

They became an incorporated society to apply for grants, did community engagement to prove there was public demand and made submissions to the Tauranga City Council’s annual and long term plans.

The hours they have volunteered to make their idea a reality is worth it and Paul says they owe a big thank you to their families’ for the time spent on the project.

“It's a lot of hours that our families haven’t had with us so that we can create it, but that’s what we wanted to do.”

There will be an opening party to celebrate the pump track’s completion on November 1 at 12pm at the track in Arataki Park.