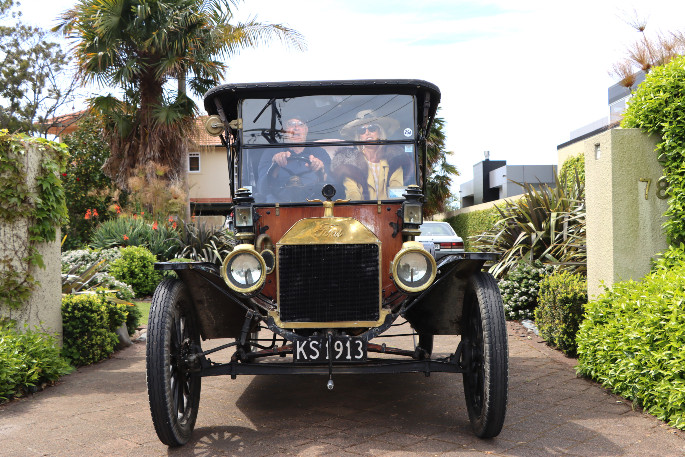 Kaaren Smylie and her husband Jim prepare to head off on a lengthy journey in their Model-T. Photo: Daniel Hines.

An old timer from the Bay of Plenty will be among 52 vehicles on display at the Vintage Car Club of New Zealand's veteran car rally in Gore this weekend.

Kaaren Smylie and her husband Jim left their Tauranga home on Saturday in their 107-year-old Model T, destined for the VCCNZ's annual veteran rally almost 1500km away, in Bluff.

Driving that distance is a feat in a modern vehicle let alone one that tootles along at 60km/h. Add in a few hills and it can take upwards of two and a half hours to travel just 100km.

Other vintage car enthusiasts usually trailer their special vehicles to locations that far away - but not Kaaren and Jim.

The Weekend Sun caught up with the couple on day four of their southern sojourn which saw them on the road between Kaikoura and Ashburton.

Kaaren, in what we suspect could have been an understatement, reported they'd “had a little bit of a drama” earlier in the day.

“We were driving along not far from Amberley when our tyre completely flew off and went right up the road,” Kaaren says.

“The driver did extremely well to keep the car on the road and it didn't do too much damage to the rim. “A very nice gentleman stopped to help us get a new tube back into the rim and we headed off back on our journey.

“It's not often that sort of thing happens” Kaaren adds.

The couple set off by 8am each morning and aim to be off the road by around 4pm. The Model T doesn't have headlights so evening driving isn't really an option.

Weather-wise they've had a great trip with plenty of sunshine.

“Driving along the coast of Kaikoura was just lovely. We were going slow enough to see the seals and you get to enjoy all the beautiful country smells,” Kaaren says.

The trip has provided another bonus too - apparently fuel is cheaper in the South Island. (It's costing them about $25 per 100km).

They keep the tank topped up, says Kaaren. “Otherwise when they go up an incline the motor sputters and misses a bit as the fuel sloshes around.”

The Gore event runs over three days from October 16-18 and there are 52 vehicles registered.

To be considered a 'veteran', vehicles must be made in 1918 or earlier.

Participants enjoy several days of scenic driving off the usual main roads, travelling in convoys according to their speed limits.

“We've chosen to go on the fastest speed and the longest route,” Kaaren says.

The veteran cruises take them off the beaten track including on unsealed roads and sometimes onto people's private farms. The drives are made even more interesting by having to look out for and tick off particular items along the routes.

The convoy road trips also give the public plenty to marvel at.

Kaaren says you can see older people in particular start to reminisce about earlier times when they see the old cars.

Like all good vehicle shows, the event will wind up with a 'show and shine' display – a little bit like the Beach Hop - and then a prize giving, she says.

Kaaren is the North Island Club Captain of the VCCNZ. Learn more about the club at: www.vcc.org.nz