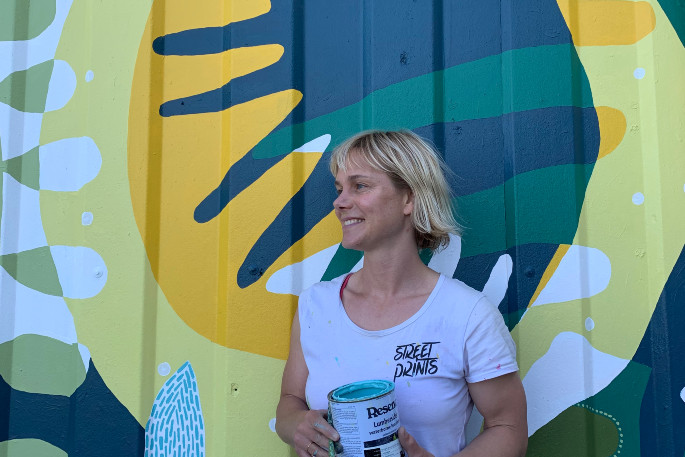 Faye Suzannah in front of the mural.

Living in a predominantly urban environment, I’ve attempted to paint pohutukawa flowers onto my own small fence panels, to help break up and give a more soothing and softened vista than what is offered by nearby apartments.

I’ve wondered if more people around the Bay have considered doing likewise, particularly in the tiny outdoor spaces that exist in the higher density housing areas.

Faye Suzannah, a Tauranga-based mural artist who came from the UK in November with her Kiwi partner and their two-year-old daughter, has taken her brushes and paints and done just that, by creating a stunning mural on the northern wall of the Tauranga racecourse grandstand.

This can be viewed and admired during the Bloom in the Bay festival hub four-day event that’s a part of the Bay of Plenty Garden & Art Festival.

I dropped in to see Faye on the ninth and final day of her mural painting project. Any large-scale mural is physically demanding work, and her partner Marcel was with her, having taken the day off work to give her a hand to complete it. While they painted we chatted about whether it had a name other than ‘the racecourse mural’.

“I’m not very good with titles. The name I used for this type of design that I use regularly is ‘jungle camouflage’.”

The giant mural blends in well with its surrounds and the colour palette that Faye has chosen ties in very nicely with nearby planting. Ferns, native organic plant shapes, seed pod and leaf patterns predominate, and there’s a subtle acknowledgement to the racing community with a well-placed horseshoe incorporated into the design.

Faye’s always been artistic and creative, studying pattern design at university in London and Bristol.

“It was on the cusp of everything turning digital. By the end of my studies, everything was happening on Adobe programmes, so I caught the end of that, as well as being mainly trained in ‘handmade’ image making.”

She didn’t want to be a fabric designer, spending hours on a computer and left London for Brazil and Argentina to stay with friends. After having her bags and digital kit stolen in Buenos Aires, she stayed on painting everything big around her, applying pattern design principles but using simple equipment of brushes and paint and decided that from then on she would paint murals.

She and Marcel, who she originally met in 2003 and then again a decade later, eventually made it to New Zealand where they have made their home in Tauranga.

Soon after arriving she found herself painting a turquoise, salmon and pink ‘jungle camouflage’ mural of leaves and ferns across a huge wall at Mount Maunganui as part of the Street Prints Mauao – International Street Art Festival.

She will be live-painting three large panels and exhibiting work also at the Bloom in the Bay festival hub.

“Before then I will formulate a really cool repeat pattern so that the three panels work separately or together,” says Faye.

“Making all-over patterns is the most satisfying part of picture making for me.

“I will also be having a stall at the festival to sell some merchandise and some artwork - screen printed stationery, originals, and prints.”

She is planning to sell the live-painted three-panel mural piece but doesn’t have a price set for it.

“It will be a ‘make me an offer’ - a sort of secret auction - and then afterwards I can call people up and tell them they’re the highest bidder, hopefully they will still want it!